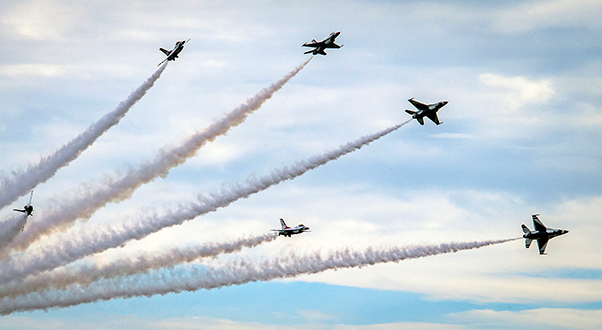 The Thunderbirds have the privilege and responsibility to perform for people all around the world, displaying the pride, precision and professionalism of American Airmen.

In every hour-long demonstration, the team combines years of training and experience with an attitude of excellence to showcase what the Air Force is all about.

The sharply choreographed, drill-style ground ceremony kicks off the demonstration by showcasing the attention to detail and esprit de corps that defines our enlisted members. As the jets take to the skies and fly only a few feet from wingtip to wingtip, the crowd gets a glimpse of the awesome skills and capabilities that all fighter pilots must possess. The solo pilots integrate their own loud and proud routine, exhibiting some of the maximum capabilities of the F-16 Fighting Falcon — the Air Force’s premier multi-role fighter jet. 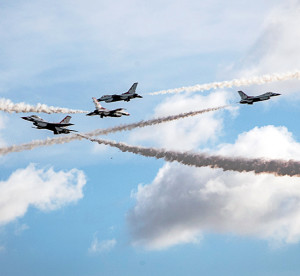 Admission to air shows at military installations are generally free and open to the public. Cost for attendees at civilian air show sites may vary. Please check show sites for prices, as the Thunderbirds do not have that information.