The X-56A team has suppressed flutter, which is a potentially destructive oscillation, with a modern and a classical controller for the first time at NASA’s Armstrong Flight Research Center in California.

The controllers are essentially two mathematical ways of directing the aircraft in flight and permit the project to advance research on lightweight, more flexible wings.

The X-56A aircraft is intended to facilitate the development of tools and technologies and acquire data to validate modeling techniques. The results could enable future airliners to use lighter weight, flexible wing designs to conserve fuel, said Cheng Moua, X-56A project manager.

Taking advantage of calm and sunny skies, the X-56 team flew with the modern controller to expand the flight envelope. The flight also featured the collection of additional data to improve understanding of the aircraft dynamics at a range of fuel levels with the two controllers.

The classical controller is a simpler formulation, which makes it easier to intuitively understand the aircraft behavior and dynamics. The modern controller is more complex and robust. It is expected to permit the aircraft to operate safely at higher speeds, suppressing flutter deeper into the regions where the aircraft is less stable.

In an effort to prove the effectiveness of the flutter suppression with the modern controller, researchers planned a sequence of flight maneuvers where the controller was turned off — for less than two seconds at a time as the aircraft approached flutter — allowing the flutter mode to grow uncontrolled. When the system reactivated after a set time, it stabilized the flutter mode and lessened the oscillations. The calm conditions allowed the team to clearly see the aircraft dynamics, as turbulence can make it difficult to determine the cause of a given set of dynamics. 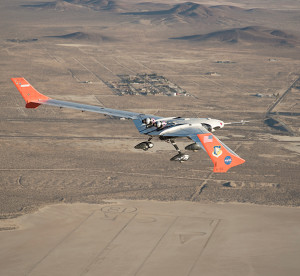 The remotely piloted X-56A, which is equipped with highly flexible lightweight wings, flies a research mission.

“If the controller works well, you would fly right past flutter and you’d never know it because you don’t see a thing,” Moua said. “During these test points we could see the growth of flutter. The team did a really good job of making sure it was a gradual buildup to flutter instability.”

The flight success means Jeffrey Ouellette, an Armstrong dynamics and controls engineer, might soon be able to get the information he needs to refine the aircraft models.

‘With the more sophisticated modern controller we will eventually fly at faster and faster speeds, well past flutter,” Ouellette said. “That’s when we will obtain the information that will allow us to refine the model to better predict the speed that the aircraft will encounter flutter.”

For now, the team is happy with the milestones and is ready to reach new ones.

“We have been working since 2012 for a flight day like Friday,” Moua said. “We have had to persevere and go back to the drawing board to overcome major obstacles. These achievements are awesome.”

The next task will be to fine tune the modern controller, which should allow the X-56A to travel faster with a larger safety margin. Other items for the team are data analysis, model validation and a continuation of technology verification through the end of flights in February. 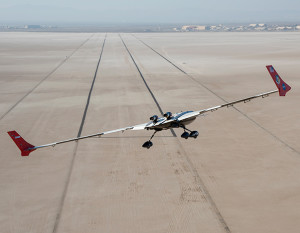 The remotely piloted X-56A concludes a research mission with final approach and landing.

One of those technologies the team would like to explore in a potential X-56A follow-on phase is the Fiber Optic Sensing System. It is possible that the system, because it measures the structural response with such high resolution, could be used to not only collect real time data, but use that data in the flight control system. If that happens, it opens the door to simplifying aircraft control and producing even higher performance and more reliable control system designs.