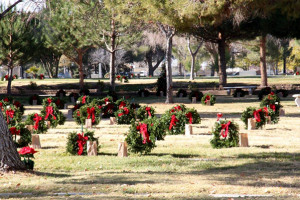 Holiday wreaths mark the graves of veterans buried at the Lancaster Cemetery. The annual placing of the wreaths is part of the national campaign, Wreaths Across America.

Placing a wreath each year on veterans’ graves is not only a very personal tradition for some family members, it is also a way for a community to come together during the bustling holiday season. By remembering, honoring and teaching future generations, it reminds us not to take for granted the sacrifices made, that enable us to celebrate our religious freedoms and holiday traditions.

Every once-in-awhile, when Antelope Valley Cemetery District Manager Dayle DeBry needs a break from the office or just to clear her head, she walks among those laid to rest looking for an interesting story.

A few months ago she came across a grave with “Spruce Squadron” on the marker. “I never heard of this before so I did some research,” said the genealogist. DeBry discovered that James Boggan Coleman, (1890-1953) was born in Texas and moved to the Antelope Valley as a young boy.

A private in the Army, Colman served in Vancouver and logged spruce trees for World War I airplanes.

Workers in the division were members of the Loyal Legion of Loggers and Lumberman, and were specifically formed to support the Army’s wood production operations. Their mission was to produce high quality Sitka Spruce timber for the war efforts. The DH-4 Liberty bi-plane was one of the planes made of spruce. Colman lived with his sister, her husband and family after the war and worked at the Salt Works as a machinist in Saltdale, Kern County, Calif. His sister, Claudia DeFoor, is buried at Lancaster Cemetery also. “There is so much history, right here,” DeBry told guests. 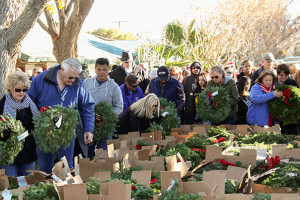 Volunteers prepare to place wreaths on the graves of U.S. veterans at the Lancaster Cemetery Dec. 15, 2018. They were taking part in the nationwide Wreaths Across America campaign.

Sadly, members of the Patriot Guard laid the first wreath honoring their brother, Vietnam veteran Fred Johnson, who was laid to rest last week in the Bakersfield National Cemetery. Johnson was killed on his motorcycle in Colorado, a month after moving away from the Antelope Valley. “Fred served in the U.S. Navy 24 years, two months and 17 days. As Fred would say, I joined the Navy and forgot to get out,” shared DeBry. Coleman moved to the Antelope Valley at age nine and was a member of the Patriot Guards, American Legion and was a Friend of the Lancaster Cemetery. His wife, Lois, has many family members interred at the Lancaster Cemetery and will donate her husband’s uniform to the Rural Museum at the Antelope Valley Fairgrounds.

Members of the Ketchum family provide several wreaths each year. One is for Richard Allen Ketchum (1935-2016) who served in both the U.S. Navy and U.S. Air Force, and had a total of 49 years of Federal service, that also included working at Lockheed and NASA. “We both retired from NASA and walked out on the same day,” said Ida Ketchum, Richard’s widow. Keeping with the family ritual, Ida’s granddaughter, Sheyenne and her son, Taylor Allen Ketchum, will keep the tradition alive as long as they can. 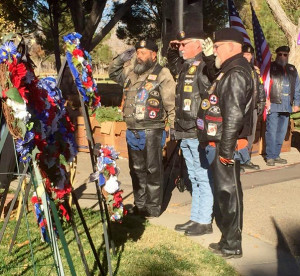 Members of the Patriot Guard honor one of their own – Vietnam veteran Fred Johnson who was recently killed in a motorcycle accident. Johnson served more than 24 years in the U.S. Navy.

Judy Hatcher, a member of The Daughters of the American Revolution, has been placing wreaths for nine years along with her family. Her grandson, Andrew, first met a soldier when he was three years old, while laying a wreath.

“I remember him in his little yellow raincoat, it was cool and rainy and he was having the best time — he was so cute — I’ll never forget that. We look forward to this each year; Andrew hasn’t missed a year since he was three.” reminisced Hatcher. Unfortunately, due to lack of membership, the Daughters of the American Revolution may be coming to an end for the Antelope Valley Chapter.

Under the direction of Anthony Faaborg, the Presentation of the Colors was performed by Knight High School Air Force Junior ROTC. The American Legion Riders formed the Color Line while guests observed a minute of silence honoring veterans and Gold Star Mothers and Fathers. Lockheed Martin employees were the first on scene, preparing wreaths, while Jin and Uno Hur of Crazy Ottos served refreshments.