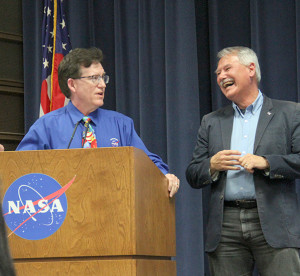 Sean McMorrow, Director of Mission Systems Directorate, shares a few stories about working with Albion Bowers, NASA Armstrong’s chief scientist, during Bowers’ retirement reception. Among Bowers’ many accomplishments, working and mentoring students was one of his most treasured experiences.

Albion Bowers will soon retire as NASA Chief Scientist but will continue with his true love, mentoring students, whenever possible.

Earning a Bachelor of Science in aeronautical engineering and a Master of Engineering from California Polytechnic State University, San Luis Obispo, he began his career with NASA in the Graduate Student Research Program in 1982.

“It’s been an amazing, amazing time, I have to say,” said Bowers at a retirement farewell at NASA’s Armstrong Flight Research Center at Edwards. “When I first came here, I had no idea that you could do this much and have this many great friends to do things with.”

Bowers said he loved working with interns because they were fearless. “It’s the old guy’s approach to say ‘You can’t do that,’ but interns are crazy, they just launch off — I’ve always tried to give them a place where they could fail. Often times I was not a good mentor because I burst out laughing at their mistakes and I really should not have done that,” he said with a grin. 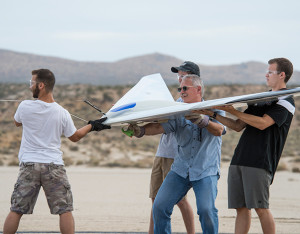 Al Bowers, center, and a group of student interns hook up a bungee cord for a flight of the Prandtl-D 3C subscale glider aircraft.

Among his many accomplishments, Bowers is a member of the Soaring Society of America and the Experimental Soaring Association. He co-authored the 1992 textbook “Handbook of Intelligent Control” and has authored 29 research publications, along with contributing to seven books on aviation history. In 2006 he received the NASA Exceptional Service Medal and in 2007, NASA’s Exceptional Service Medal for his contributions to experimental research aircraft. He also received the NASA Exceptional Engineering Achievement Medal in 2014.

David McBride, director of NASA Armstrong, presented Bowers with a watch. “I don’t know why we do this when retired people really don’t care about time.”

Laura Fobel, chief of the Technology Transfer Office at NASA Armstrong presented Bowers with a special surprise — a patent of Bower’s Prandtl project that proved that not only could adverse yaw be overcome, but it could be turned into proverse yaw for aircraft, without relying on rudders or complicated computerized flight controls to accomplish it — just as birds achieve it.