Many movies have been filmed up here in our High Desert home, but one that stands out and really takes the cake is one that only a trip into the Netflix catalog will satisfy your desire to see. A really unique film with a crazy story line that was pretty much the standard fare in the early 1960s “John Goldfarb, Please Come Home!”

The unlikely plot belongs to script writer William Peter Blatty (later of The Exorcist fame), who got the idea for the story after a discussion on the U-2 spy plane at the home of Shirley MacLaine’s and her then-husband Steve Parker one evening. How does the U-2 fit in? It seems that a pilot of one of the spy craft (Richard Crenna) landed by mistake on a football field of the king of Fawzia.  Fawzia is up in arms about the king’s son not making the team at Notre Dame and wants revenge, and it also seems that Crenna used to be a football coach! (How convenient!)

The Fawzina football team, bent on revenge against the Fighting Irish, played on a specially constructed field which cost the producer $12,000 to build. The turf, raised on a farm in Tehachapi, was transported to Rosamond Dry Lake and kept alive with 10,000 gallons of water that was trucked to the set every day. Around that football field were tents, a royal viewing box, fake minarets and a phony palace façade complete with all the trappings. Camels, Nubian slaves, harem girls and monkeys roamed the area, each adding their own color to the production. 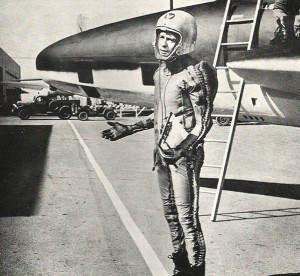 Richard Crenna played a floundering U-2 pilot and football coach in the movie.

For a period of three weeks, more than 100 workmen at a cost of more than a half million dollars transformed the lake bed into the desert empire of Fawzia. On top of all the over-the-top sets was the unique addition of one of the king’s favorite hobbies — myriad of miniature railroad tracks, with a solid gold train with jeweled track that ran through every room in the palace driven by owls, rabbits, bears and occasionally people. The trains for the movie cost the producer $60,000 to build!

Richard Crenna, Peter Ustinov, Shirley MacLaine, Jim Bacckus, Harry Morgan and a host of future stars filled the hotels and motels along Sierra Highway in Lancaster for the duration of the filming. They brought a lot of money into the local economy and, of course, were quite the topic of conversation for those that made the daily commute to Edwards every day over Rosamond Dry Lake!

Because the plot was really about a football game, it was a Hollywood challenge to make the football scenes authentic. Hollywood at the time knew a little bit about everything, but not much about the game of football. So to get that game feel, the Notre Dame “team” consisted of a lineup of pro ball players and college grid stars. At the end of the game, and in disguise, Shirley MacLaine’s character was to make a 99-yard run down the field. The movie makers kept yelling, “Let her through!” — as it was not a natural act for a pro ball player NOT to tackle anybody running with a football!

The Kingdom of Fawzian, thanks to the magic of Hollywood, was created on Rosamond Dry Lake.

I will leave the harem girls and the U-2 parts for you to discover how they apply to the movie plot. They are probably not the subject matter to be shared in an aerospace publication, after Hollywood put their spin on it to sell tickets, but it does add to the humor of the movie (in a 1960s kind of way.)

One last thing to add is that this movie, when completed, did not make it to the big screen in a very timely manner, thanks in part to the courts in New York. It seems that the Fox Movie Studios and the University of Notre Dame ended up in court, as the University did not appreciate the portrayal of Notre Dame as a losing football team!  At some point it did make the big screen and now waits for all of you to discover on a movie streaming service that will give you the opportunity to see Rosamond Dry Lake with a half a million dollar face lift and a full size football field, with gushing oil wells around its perimeter!

One thing for certain is somebody sure had a great line to share when asked what they did today at work. With a straight face, he could say, “I mowed the grass on Rosamond Dry Lake!”

Until next time, Bob out….