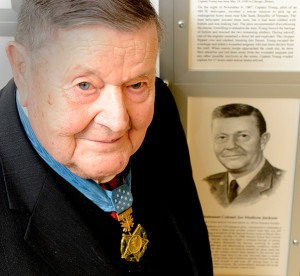 Retired Col. Joe Jackson poses with a permanent Medal of Honor display March 24, 2015, at the Pentagon in Arlington, Va. The display depicts him and other medal recipients. Jackson was in the Pentagon with fellow Medal of Honor recipient, retired Col. Leo Thorsness for a Q-and-A session with members of the Air Staff, hosted in the Hall of Heroes.

Known as an Air Force Hero of the Vietnam War, then-Lt. Col. Jackson was awarded the prestigious medal on Jan. 16, 1969, by President Lyndon B. Johnson, for his selfless, heroic actions in combat.

“We are saddened by the loss of Medal of Honor recipient Col. Joe Jackson, his amazing story of humility, courage and Airmanship will be remembered,” said Secretary of the Air Force Heather Wilson. “Our heartfelt condolences go out to his family and friends.”

On May 12, 1968, Jackson, commander of an unarmed C-123 transport aircraft, flew on an emergency mission from Da Nang to Kham Duc, South Vietnam, after a special forces camp at Kham Duc was overrun by enemy forces. They had taken the forward outpost and were in complete control of the airstrip, which was surrounded on all sides by mountainous terrain.

While orbiting over the battle area, Jackson learned by radio about a three-man combat control team that had been inadvertently left behind after the camp was air evacuated. Another C-123 transport was ahead of Jackson in the traffic pattern. Though the rescue aircraft landed successfully on the debris-littered airstrip, it failed to evacuate the team. Jackson answered the call by descending rapidly from 9,000 feet and making an assault landing on the strip, while under heavy enemy fire. After he stopped, a rocket fell in front of the transport. A dud, it bounced harmlessly toward the nose of the plane without exploding.

Jackson landed near the spot where the CCT was reportedly hiding, and ultimately rescued the men. With the team safely on board the aircraft, he quickly took off under a mortar barrage and intense automatic weapon fire from the surrounding hills. After landing at Da Nang the crew found that not a single bullet had touched their aircraft during the entire flight.

“As one of only two living, Air Force Medal of Honor recipients, his story of courage and leadership was uniquely preserved through his own account of that mission, the decisions that led up to it, and the life he aspired to lead” said Air Force Chief of Staff General David L. Goldfein.