On a mission in December 1944, Charles “Charlie” Rader was top turret gunner, one of a 10-man crew on a B-17 heavy bomber from the “Rum Hounds” Squadron, flying out of Foggia, Italy, with the 15th Air Force.

A citation awarded to Rader, 98, describes how Rader, while wounded and bleeding, stayed at his guns and drove a Nazi Me-109 away from the heavily battle-damaged aircraft. Rader dropped from his turret that had been shattered by the Luftwaffe fighter. He moved all the way forward, disregarding his wounds, and assisted the pilot in locating a field to crash land. Rader went aft, “I opened the rear door, and we got everybody out. We saw some of the meanest looking people I’ve ever seen.” Adding, “Armed? Weapons? Yes! They were partisans, with Tito.”

The partisans were fighting the Nazis too. In other words they were “friendlies” and had a field hospital near that “boulder strewn field” where the crew crash-landed after leaking fuel and losing three out of four engines. The B-17 Flying Fortress could take a licking and keep on ticking.

All crew, even the badly wounded nose gunner survived, and were exfiltrated by a Royal Navy ship.

“It’s an honor to meet you, and you are what the Air Force is all about,” Teichert told Rader.

“Well, I’m glad I was here to enjoy this,” Rader said. 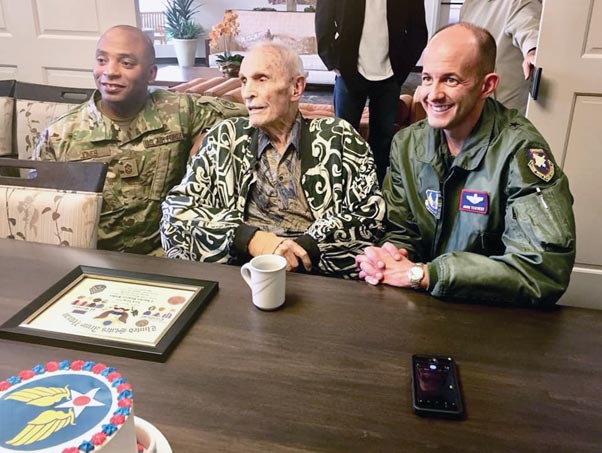 Rader was joined by his son, David, and about a dozen family friends and veterans.

Rader was recognized as part of a volunteer project — “You Are Not Forgotten” — initiated by Marine Corps veteran Jerry Lawrence. The Certificate of Recognition was produced by Lawrence and his associate, John Wallasky, a hospice chaplain.

Rader, Alvis notes, is one of the 722 “Boulevard Boys,” The Greatest Generation veterans who went out to help win World War II. Their exploits are recounted in a local history book written, edited and compiled by Antelope Valley historian Dayle DeBry, general manager Lancaster Cemetery.