My husband Al and I feel incredibly blessed to have known so many of the test pilots and flight test engineers from the Golden Age of Flight Test at Edwards Air Force Base!

We are still making friends with the special people who made history at Edwards. You know how someone comes into your life and you say, “Wow! This person is fantastic! What cool experiences they have had in their life.” Well, that describes to a ‘T’ our newest friend, Johnny Armstrong (no relation to Neil, but Johnny knew him well), who just happens to fly model airplanes with my former brother-in-law, John Foltin, in Lancaster.

They are proud members of the ‘OFFC’ (Old Farts Flying Club) — all retired pilots and flight test engineers. Members include a couple of familiar names to those who know the flight test history of Edwards Air Force Base — Bob Hoey and John Manke. Sadly, Manke recently passed away and is greatly missed.

Johnny Armstrong has written about some of his flight test experiences at Edwards in the late 1950s and posted a story on Facebook’s B-58 Hustler Appreciation Group on April 3, 2019, celebrating the 61st anniversary of his Mach 2 flight with Maj. Fitz Fulton in the YB-58 Hustler! He became the first non-rated U.S. Air Force officer to fly at Mach 2. 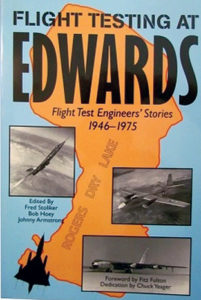 This story is published in a book sold by the Flight Test Historical Foundation at Edwards. The book is called “Flight Testing at Edwards — A Book of Flight Test Engineers’ Stories 1946-1975.” So many wonderful stories written by the men who were really there! The forward is by Fitz Fulton and the dedication is by Chuck Yeager. You can call the Air Force Flight Test Museum Gift Shop at 661-258-1658 to order your copy.

This was the Phase II designation in the U.S. Air Force YB-58 test program in 1957. Phase I flight test program was conducted by Convair, the manufacturer.

Johnny said, “Here I was a ‘still green behind the ears,’ 24-year old second lieutenant at the Convair plant in Fort Worth, Texas, after having put on my gold bars only a year prior and reporting to Edwards.”

“I was an apprentice flight test engineer assisting Ev Dunlap along with the pilot, Capt. Fitz Fulton, and crew chief, Master Sgt. Cliff Garringer,” he said.

The Fort Worth Press article with the headline “B-58, Two Engines Out, Passes B-47!”

In the story, Johnny stated, “The first two four-engine supersonic Convair B-58 bombers were given the ‘Y’ designation, indicating the aircraft were considered prototype aircraft (a notch above being experimental). It was a sleek and exciting aircraft for its time, with four afterburning GE J-79 engines mounted on pods on the highly-swept delta wing. The aircraft was designed to have a Mach 2 dash capability to and from the target area dropping the large externally-mounted bomb pod, which also doubled as a fuel tank. To optimize engine performance above Mach 1, the engine installation included moving nose cones in the inlets to position the shock wave for optimum air flow to the engine.”

I remember my brother, Carl Hellwig, talking about the YB-58 when I was in high school. My father, M. G. Hellwig and Carl worked in the Instrumentation Lab at Edwards. Carl was one of the instrumentation engineers who fitted monitoring and recording equipment on and into aircraft before test flights. He was thrilled to work on the YB-58! Our family were friends with Fitz and Erma Fulton, so it was particularly exciting for my father and brother, as they felt they had a special interest in the whole program, since Fitz was the pilot.

Johnny said, “The flight test engineer’s station was the second of three tandem flight stations. It was equipped only with an eight day clock, airspeed indicator, an altimeter and the data management system panel.”

He described the restricted vision when seated in the flight station. “Only a small peephole measuring about 5” by 10” on each side of the hatch gave the engineer a very limited view to the outside world.” 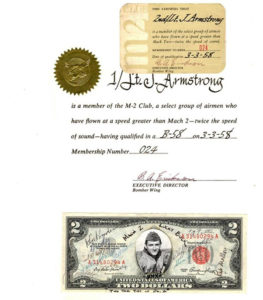 The certification that then 1st Lt. J. Armstrong is a member of the M-2 Club.

Johnny flew many test missions with Fitz Fulton at the controls. It seemed that every time they were set to reach Mach 2, something would happen to end the mission. He really wanted to reach that Mach 2 goal.

Imagine what Johnny’s thoughts must have been in that flight station when all of a sudden the airplane began to shake and vibrate intensely, accompanied by lots of metal rattling noise and his body being pushed to one side. Then he heard the voice of pilot Fitz Fulton over the headset say, “Johnny, get the data on.”

Johnny said, “As he threw the data tape switch on, he knew what his next step was — clean up his station to get ready to leave it! The fold down table over his lap had to be stowed before he could eject!”

Johnny explained, “The outboard #4 engine had encountered what I now believe to be an unstart. In those days I did not know about such things. When the shock wave from the engine nose cone is not at the proper position, the engine regurgitates the airflow back out the inlet, producing a large amount of drag. Finally, as the aircraft decelerated, things quieted down and we were headed back to Carswell with the number 4 engine shut down. It was now just another research test flight, with less than our full complement of thrusters. Then, in a typical Fulton calm radio call, he announced he was shutting down the #1 engine due to low oil.” 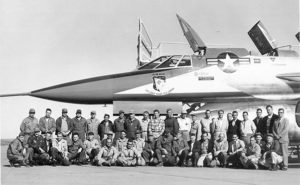 What happened next was really unexpected! Johnny said, “We were slowly descending through 25,000 feet on two engines, but soon Fitz radioed in an observation tone that we were passing a B-47 heading in the same direction.”

Somehow a newspaper got wind of what happened and did a startling article with a headline that read: “B-58, Two Engines Out, Passes B-47!” Well, you have to understand what made it kind of pleasing for the Fort Worth company was that there was always some rivalry between Convair and Boeing, since Boeing’s B-52 won the next-generation bomber contract over Convair’s YB-60.

Johnny said, “After the flight the Convair crew made a big to-do over it, presenting me with a two dollar bill with my picture pasted in the center and signed by all the crew associated with 661. Later at a dinner ceremony of the Mach 2 Club, I received my Mach 2 pin and Mach 2 card #24, signed by B.A. Erickson who was Convair chief pilot at the time.”

At the beginning of his flight test engineer career, after a four-year tour at Edwards, Johnny returned to his home state of Alabama to work at Marshall in Huntsville. 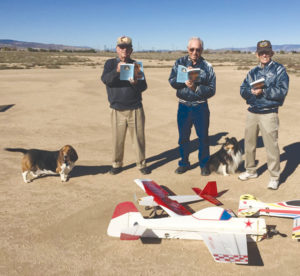 He worked for Werner Von Braun’s team of Germans, developing the USA Redstone Rocket. Johnny plotted telemetry data from the first flight of the Redstone.

He was the flight test engineer on the successful flight test to set a new altitude record with pilot Capt. Joe Jordan, flying an F-104 Starfighter to 103,395 feet. Following his military service, he was with NASA Marshall Space Flight Center as part of the Flight Evaluation team for the first launch of the Saturn vehicle.

He was also the flight planner for the X-24A and X-24B lifting bodies and served as the Air Force Flight Test Center project manager for the X-24B, the Department of Defense evaluation of the Space Shuttle, National Aerospace Plane X-30, X-33, and others.

Johnny retired as the chief engineer of the AFFTC’s 412th Test Wing Hypersonic Combined Test Force on Feb. 2, 2012. Recent projects include the X-37A and X-37B Orbital Test Vehicle and the X-51A Scramjet demonstrator. He is credited for maintaining a capability at AFFTC for over 20 years to be leaders in flight test of hypersonic and access to space vehicles. Author of over 20 technical reports and papers, he was the organizer of the Aerospace Vehicle Test Course taught for several years at the USAF Test Pilot School.

What a guy! What fabulous aerospace history. You can bet he has mentored many young engineers along the way. So thankful to call this extraordinary flight test engineer, “friend!”