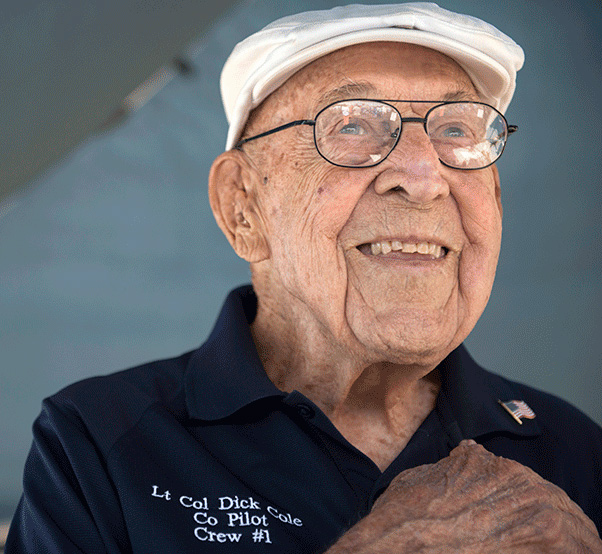 A legendary chapter in Air Force history has come to a close.

“Lt. Col. Dick Cole reunited with the Doolittle Raiders in the clear blue skies today,” said Secretary of the Air Force Heather Wilson. “My heart goes out to his friends and family as our Air Force mourns with them. We will honor him and the courageous Doolittle Raiders as pioneers in aviation who continue to guide our bright future.”

On April 18, 1942, the U.S. Army Air Forces and the Doolittle Raiders attacked Tokyo in retaliation for the Japanese attack on Pearl Harbor, which boosted American morale in the early months of World War II.

“There’s another hole in our formation,” said Air Force Chief of Staff Gen. David L. Goldfein. “Our last remaining Doolittle Raider has slipped the surly bonds of Earth, and has reunited with his fellow Raiders. And what a reunion they must be having. Seventy-seven years ago this Saturday, 80 intrepid Airmen changed the course of history as they executed a one-way mission without hesitation against enormous odds. We are so proud to carry the torch he and his fellow Raiders handed us.”

Cole was born Sept. 7, 1915, in Dayton, Ohio. In 1938, he graduated from Steele High School in Dayton and attended two years of college at Ohio University before enlisting as an aviation cadet on Nov. 22, 1940. Soon after he enlisted, Cole received orders to report to Parks Air College in East St. Louis, Ill., for training before arriving at Randolph Field, Texas, and later, Kelly Field, Texas. He completed pilot training and was commissioned as a second lieutenant in July 1941.

While Cole was on a training mission with the 17th Bombardment Group at Pendleton, Ore., word came that the Japanese had attacked Pearl Harbor.

The 17th BG flew anti-submarine patrols until February 1942, when Cole was told he would be transferred to Columbia, S.C. While there, he and his group volunteered for a mission with no known details. Cole would later say that he thought his unit was heading to North Africa.

For weeks, Cole practiced flying maneuvers on the B-25 Mitchell, a U.S. Army Air Corps twin-engine propeller-driven bomber with a crew of five that could take off from an aircraft carrier at sea, in what some would call the first joint action that tested the Army and Navy’s ability to operate together. When the carrier finally went to sea to bring 16 bombers closer to maximize their reach, it wasn’t until two days into the voyage that the Airmen and Sailors on the mission were told that their carrier, the USS Hornet, and all of its bombers, were heading in the direction of Tokyo.

In an age-before mid-air refueling and GPS, the USS Hornet weighed less than a quarter of today’s fortress-like aircraft carriers. With Cole as the copilot to then-Lt. Col. Jimmy Doolittle, the B-25 Mitchell bomber #40-2344, would take off with only 467 feet of takeoff distance.

What made the mission all the more challenging was a sighting by a Japanese patrol boat that spurred the task force commander, U.S. Navy Adm. William F. “Bull” Halsey, to launch the mission more than 650 nautical miles from Japan — 10 hours early and 170 nautical miles farther than originally planned. Originally, the Mitchells were supposed to land, refuel and proceed on to western China, thereby giving the Army Air Corps a squadron of B-25s and a commander. But now the aircrews faced increasing odds against them, in their attempt to reach the airfields of non-occupied China. Still, Cole and his peers continued with their mission.

Flying at wave-top level around 200 feet and with their radios turned off, Cole and the Raiders avoided detection for as much of the distance as possible. In groups of two to four aircraft, the bombers targeted dry docks, armories, oil refineries and aircraft factories in Yokohama, Nagoya, Osaka and Kobe as well as Tokyo itself. The Japanese air defense was so caught off guard by the Raiders that little anti-aircraft fire was volleyed and only one Japanese Zero followed in pursuit. With their bombs delivered, the Raiders flew towards safety in China.

Many Airmen had to parachute out into the night, Cole himself jumping out at around 9,000 feet. All aircraft were considered lost with Cole’s own aircraft landing in a rice paddy full of night soil. Of the 80 Airmen committed to the raid, eight were captured by Japanese forces with five executed and three sent to prison (where one died of malnutrition). All of the 72 other Airmen found their way to safety with the help of Chinese farmers and guerrillas and continued to serve for the remainder of World War II.

The attack was a psychological blow for the Japanese, who moved four fighter groups and recalled top officers from the front lines of the Pacific to protect the cities in the event American bomber forces returned.

After the Doolittle Raid, Cole remained in the China-Burma-India Theater supporting the 5318th Provisional Air Unit as a C-47 pilot flying “The Hump,” a treacherous airway through the Himalayan Mountains. The USAAF created the 5318th PAU to support the Chindits, the long-range penetration groups that were special operations units of the British and Indian armies, with Cole as one of the first members of the U.S. special operations community. On March 25, 1944, the 5318th PAU was designated as the 1st Air Commando Group by USAAF commander Gen. Henry H. Arnold, who felt that an Air Force supporting a commando unit in the jungles of Burma should properly be called “air commandos.” Cole’s piloting skills blended well with the unconventional aerial tactics of Flying Tiger veterans as they provided fighter cover, bombing runs, airdrops and landing of troops, food and equipment as well as evacuation of casualties.

In his final years, he remained a familiar face at Air Force events in the San Antonio area and toured Air Force schoolhouses and installations to promote the spirit of service among new generations of Airmen. On Sept. 19, 2016, Cole was present during the naming ceremony for the Northup Grumman B-21 Raider, named in honor of the Doolittle Raiders.

“We will miss Lt. Col. Cole, and offer our eternal thanks and condolences to his family,” Goldfein said. “The Legacy of the Doolittle Raiders — his legacy — will live forever in the hearts and minds of Airmen, long after we’ve all departed. May we never forget the long blue line, because it’s who we are.”