The Northrop N9MB was the sole remaining example of its type, one of four subscale technology demonstrators built during World War II to prove flight control techniques for a proposed flying wing bomber. The flying wing configuration is so called because the tailless, all-wing aircraft lacks a conventional tubular fuselage. Purchased in the 1950s by Planes of Fame Museum founder Edward T. Maloney, the N-9MB was painstakingly restored during a 13-year effort by volunteers.

Although some of the internal framework and the center section surrounding the cockpit included metal components, most of the airframe structure and airfoils were constructed from wood. In November 1994, following an estimated 20,000 hours of restoration, the N-9MB took to the air as part of the museum’s collection of flyable vintage airplanes. Since then, Planes of Fame volunteer pilot David Michael Vopat logged hundreds of flying hours during air shows around Southern California. At the time of the accident the airplane was scheduled to fly at the Planes of Fame air show at Chino Airport.

Although officials did not immediately name the deceased pilot, sources confirmed that Vopat was at the controls when the N-9MB spun into a prison yard at the California Rehabilitation Center in Norco. The plane did not hit any buildings on the 98-acre medium-security facility, although some outdoor exercise equipment was damaged, and no one on the ground was injured. The N-9MB was completely destroyed.

John K. “Jack” Northrop’s tailless designs were among the most exotic airplanes of the early 1940s. The company’s first true flying wing, the N-1M, flew in 1940. Although overweight and underpowered, it was considered a successful concept demonstrator. This led Northrop in May 1941 to propose development of a flying wing bomber capable of cruising at around 40,000 feet, with a desired range of 10,000 miles while carrying a 10,000-pound bomb load. The Army Air Forces subsequently agreed to purchase a handful of subscale demonstrators and several full-scale prototypes.

The first demonstrator, designated N-9M, was a one-third-scale flying mock-up designed to mimic the flying qualities of Northrop’s XB-35 bomber prototype. The N-9M was built to provide flight-test information from which the maneuverability, controllability, and performance of the XB-35 could be accurately predicted. Four of these aircraft — the N-9M-1, N-9M-2, N-9MA, and N-9MB – were built between 1942 and 1945.

Each airplane was powered by twin pusher propellers, had a wingspan of 60 feet, and weighed around 7,000 pounds. The N-9M was designed with an endurance of 3.2 hours with 100 gallons of fuel, and a service ceiling of 21,500 feet. Flight controls consisted of elevons, rudders, and trim tabs, but no vertical control surfaces.

Test pilot John W. Myers piloted the maiden flight of the N-9M-1 on Dec. 27, 1942, from Northrop Field in Hawthorne, Calif. For safety and security reasons, Northrop’s test operations were later moved to Muroc Army Airfield in the Mojave Desert north of Los Angeles. Over the next several months the N-9M-1 completed 43 more flights. With few exceptions, most were terminated due to mechanical failures of one sort or another. 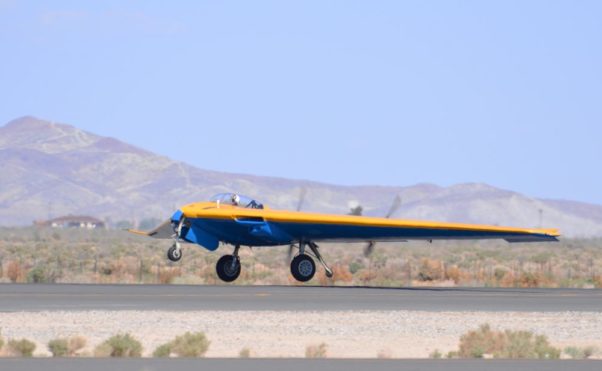 The Planes of Fame Air Museum N-9MB at the 2014 Los Angeles County Air Show at Fox Field in Lancaster, Calif.

The N-9M-1 was lost in a spin accident on May 19, 1943, taking the life of Northrop test pilot Max Constant. After this loss, Myers returned to the program to fly the N-9M-2. The second N-9M had a longer career than the first, but it nearly ended badly on its first flight. Just after takeoff, the canopy suddenly ripped away. Myers circled the field and brought the airplane in for a safe landing with only minor damage. Repairs set the test program back another month.

Myers served as the principal pilot for the N-9M-2 until September 1943, when Northrop test pilots Harry Crosby and Alex Papana joined the program. Due to heavy rains at Muroc, testing was temporarily moved to Roach Lake, Nevada, in March 1944. Test results were rapidly assimilated into the design of the XB-35. On April 19 several Army Air Force pilots arrived from Wright Field, Ohio, to fly the N-9M-2. These familiarization flights were cut short when one of the pilots forgot to lower the landing gear. Fortunately, the damage was repairable.

A month later the N-9M-2 was joined by the N-9MA, which featured improved flight controls. Completion of the fourth and final demonstrator, dubbed N-9MB, was delayed while awaiting delivery of more powerful engines. Additional improvements to the N-9MB included leading edge slots and a fully powered irreversible flight control system. The airplane had split rudders, which were later used on the XB-35, the jet-powered YB-49, and decades later, with some modifications, on the B-2 stealth bomber.

Harry Crosby piloted the first flight of the N-9MB on Jan. 26, 1945, and it was subsequently flown by a number of Northrop and Army Air Force test pilots. One of these was Capt. Glen W. Edwards, for whom Muroc would eventually be renamed Edwards Air Force Base. “The airplane flew surprisingly well, was more stable and handled far better than most would expect,” he concluded in his May 3, 1946, report.

He endorsed the N-9M as an acceptable analog for the full-scale bomber. “It would take hours practice to make good takeoffs and get proper coordination on turns,” he noted, “but the technique could be mastered without too much difficulty.”

The history of the N-9M family becomes somewhat murky after this point. The three diminutive demonstrators continued to serve as trainers, familiarizing aircrew with the handling characteristics of flying wings. During a May 1947 lecture, Jack Northrop noted, “Only recently have all desirable test programs been completed and the [N-9M] airplanes relegated to a semi-retirement status from which they are withdrawn only for the benefit of curious pilots.”

Several B-35 and B-49 variants were completed and flown, but never went into production. Those that survived the program were eventually scrapped along with all other associated spare parts and materials. Only the N-9MB remained and it was in a state of disrepair by the time Ed Maloney rescued it from obscurity.

Once restored, the N-9MB delighted airshow audiences, though some spectators feared the unique relic might be tragically lost should a mishap occur. This nearly came to pass in April 2006, when the N-9MB suffered an in-flight engine fire. The aircraft was landed safely with minimal damage, and was back on flight status by May 2010.