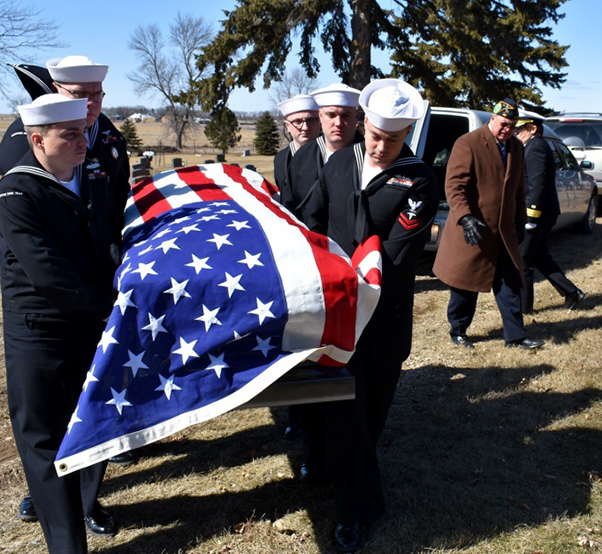 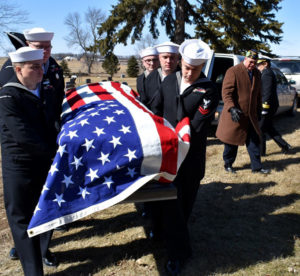 Water Tender 2nd Class Porter Leigh Rich was on his honeymoon in the fall of 1941, when he was summoned back to San Diego with orders to depart for Hawaii aboard USS Oklahoma (BB 37).

The ship was moored at Ford Island, Pearl Harbor, when it was attacked by Japanese aircraft. The Oklahoma quickly capsized after multiple torpedo hits, taking the lives of Rich and 428 other Sailors aboard during the Dec. 7, 1941, attack on Pearl Harbor.

Over the next year and a half, the remains of the crew were recovered and interred in the Halawa and Nu’uanu cemeteries in Hawaii. The American Graves Registration Service, charged with recovering and identifying fallen U.S. military personnel, disinterred them in 1947 to attempt to identify the remains, but was only able to identify 35 of the Sailors. The unidentified remains were then buried in 46 plots at the National Memorial Cemetery of the Pacific in Honolulu, and they, including Rich, were designated as unrecoverable.

Of the 16 million Americans who served in World War II, more than 400,000 died in the war. As of April, 2019, there are still over 72,000 service members unaccounted for. The number of unidentified remains has steadily declined due to the determined efforts of the Defense POW/MIA Accounting Agency (DPAA). In 2015, the Department of Defense directed the disinterment of the unidentified USS Oklahoma Sailors.

To identify the remains, DPAA and the Armed Forces Medical Examiner System use mitochondrial DNA analysis, dental and anthropological analysis, as well as circumstantial and material evidence. To date, nearly 200 remains from the ship have now been identified — including Rich.

When a Sailor is identified, the Navy’s role comes into play as they provide personnel to ensure the remains are memorialized according to the family’s wishes. Navy military funeral honors is a total force mission supported by both active duty and Reserve members. Funeral honor details perform, at a minimum, a ceremony including the folding of a U.S. flag, presentation of the flag to the designated recipient, and the playing of taps.

When a Sailor is re-interred, many times Reserve Sailors and staff from Navy Operational Support Centers (NOSCs) perform the important and time-honored tradition of bringing the shipmate home to rest.

“We’re so incredibly fortunate that today’s technology and science enables these USS Oklahoma Sailors, and many other service members, to be identified and finally laid appropriately to rest,” said Capt. Jonas Jones, commander of Reserve Component Command Northwest. “I’m extremely proud of the role our Sailors have served in this process, finally bringing closure to so many families.”

Rich’s family was among those to receive closure. After 76 years, a son who was never able to meet his father, was able to lay Rich to rest.

“This is a tremendous honor for us,” said Lt. Cmdr. Julian Carswell, commanding officer of NOSC Sioux Falls. “Being able to serve our fallen Shipmates and helping to bring closure to their family is one of the most important duties we could have.”

For the personnel of NOSC Sioux Falls, it is an enormous honor to play a role in bringing these Sailors home.

“It’s always a sad day when we perform a service for a fallen shipmate, but when you see the whole town come out to pay their respects and support the member’s family, it fills us with pride to be a small part of bringing closure to their family,” said Personnel Specialist 2nd Class Patrick Schwab, who performed honors for Rich.

Schwab’s team has performed these honors many times. Last year, with 25 NOSC Sioux Falls Sailors, they provided more than 200 military honors funerals throughout South Dakota and the surrounding areas.

At a farmhouse in Lake Preston, South Dakota, Rich’s family gathered the day before the funeral. They shared the story of their lost relative, recalled memories of his youth, perused old letters he wrote home, and glanced over a Thanksgiving menu from the holiday meal Rich had enjoyed just days before his untimely death.

Rich’s memorial at the Lake Preston high school’s gymnasium had mementos from his life on display for visitors to view. The State’s Lieutenant Governor Matt Michels and family members spoke, as other family members, veterans, farmers, students and others recalled Rich’s life.

“It is never easy to be called upon under circumstances like these,” said Mazur, “but it is an honor for us to render military honors for a fallen shipmate and to bring closure to their family.”