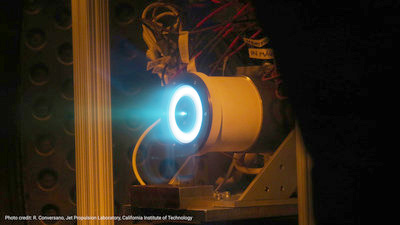 MaSMi has demonstrated class-leading performance with a peak total efficiency of 54 percent, a peak total specific impulse of 1940 s, and an estimated throughput capability of >150 kg Xe.  MaSMi is a key component of JPL’s ASTRAEUS (Ascendant Sub-kW Transcelestial Electric Propulsion System), a low-power electric propulsion (EP) system optimized for use on smallsats.  In support of ASTRAEUS, Apollo was awarded a contract to manufacture three engineering model MaSMi-EM thrusters for JPL this summer.

Apollo CEO Mike Cassidy noted, “We’re absolutely thrilled to be working with NASA JPL and with Dr. Ryan Conversano, the PI of ASTRAEUS and the inventor of MaSMi.  The MaSMi thruster that we now have the exclusive license for can produce more than 2,000,000 Ns of total impulse and yet is about the size of a soda can. We’ve heard many times that our propulsion system’s high performance coupled with our rapid, high-volume manufacturing is enabling new space missions and constellations. This new relationship with NASA JPL further demonstrates that Apollo can deliver for these new constellations.”