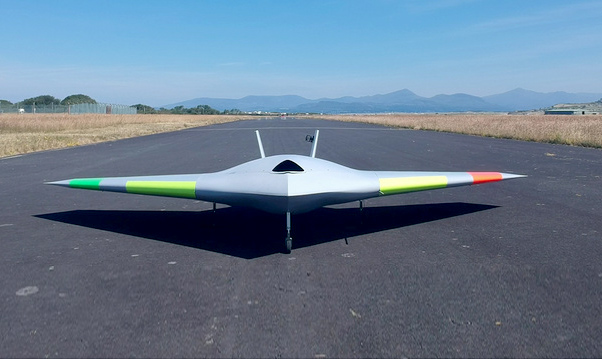 For the first time in aviation history, an aircraft has been manoeuvred in flight using supersonically blown air, removing the need for complex movable flight control surfaces.

In a series of ground-breaking flight trials that took place in the skies above north-west Wales, the MAGMA unmanned aerial vehicle demonstrated two innovative flow control technologies which could revolutionize future aircraft design.

MAGMA, designed and developed by researchers at The University of Manchester in England, in collaboration with engineers from BAE Systems, successfully trialled the two ‘flap-free’ technologies earlier this month at the Llanbedr Airfield.

“MAGMA is a great example of how collaborating with bright minds at British universities can deliver ground-breaking research and innovation,” said Julia Sutcliffe, chief technologist for BAE Systems Air. “Our partnership with The University of Manchester has identified cutting-edge technology, in this case flap-free flight, and turned what began as a feasibility study into a proven capability in just a number of months. It demonstrates how STEM can be applied in the real-world and I hope the success of these trials inspires the next generation of much-needed engineers and scientists.”

The technologies have been designed to improve the control and performance of aircraft. By replacing moving surfaces with a simpler ‘blown air’ solution, the trials have paved the way for engineers to create better performing aircraft that are lighter, more reliable and cheaper to operate. The technologies could also improve an aircraft’s stealth as they reduce the number of gaps and edges that currently make aircraft more observable on radar. 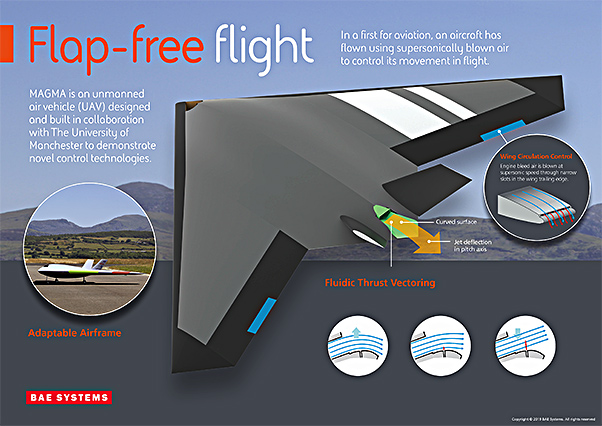 Developing such technologies helps to ensure the UK has the right technologies and skills in place for the future and could be applied to the development of a Future Combat Air System. It is the latest technological breakthrough to come from a number of BAE Systems collaborations with academia and industry, that will help the UK to deliver more advanced capability, more quickly, and through shared investment.

“We are excited to have been part of a long-standing effort to change the way in which aircraft can be controlled, going all the way back to the invention of wing warping by the Wright brothers,” said Bill Crowther, senior academic and leader of the MAGMA project at The University of Manchester. “It’s been a great project for students to be part of, highlighting that real innovation in engineering is more about finding practical solutions to many hundreds of small technical challenges than having single moments of inspiration.

“The partnership with BAE Systems has allowed us the freedom as a university to focus on research adventure, with BAE Systems providing the pathway to industrial application. We made our first fluidic thrust vectoring nozzle from glued together bits of plastic and tested it on a hair drier fan nearly 20 years ago,” Crowther continued. “Today BAE Systems is 3D printing our components out of titanium and we are flight testing them on the back of a jet engine in an aircraft designed and built by the project team. It doesn’t get much better than that.”

The technologies demonstrated in the trials were:

* Wing Circulation Control: Taking air from the aircraft engine and blowing it supersonically through narrow slots around a specially shaped wing tailing edge in order to control the aircraft.
* Fluidic Thrust Vectoring: Controlling the aircraft by blowing air jets inside the nozzle to deflect the exhaust jet and generate a control force.

The trials form part of a long-term collaboration between BAE Systems, academia and the UK government to explore and develop flap-free flight technologies, and the data will be used to inform future research programs. Other technologies to improve the aircraft performance are being explored in collaboration with NATO Science and Technology Organization.