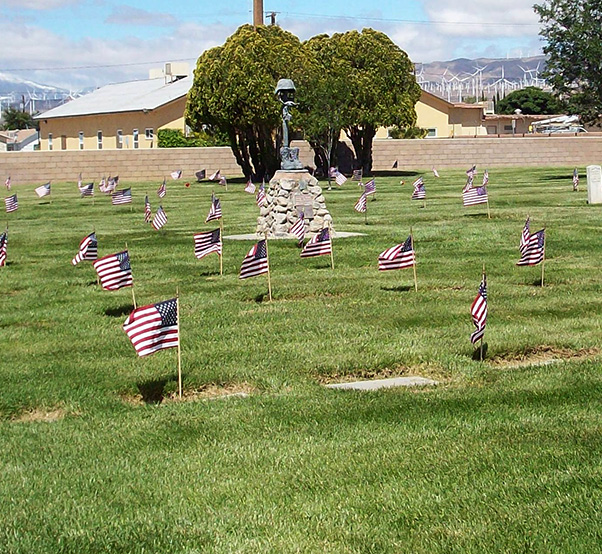 At Mojave Cemetery small American flags fluttered in the cold 30-mph winds above the graves of 462 veterans. The flags were placed on veterans graves by Tami Kelley and Mojave High School students.

“You are doing an important thing today; you are making a difference, by simply being here. You are not forgetting the sacrifices made for our freedom,” said Harold Smith, member of the East Kern Cemetery District Board of Trustees, as he welcomed everyone to the ceremony. “This is not just another three-day weekend, or another day to shop. This is Memorial Day when we honor those who gave their all and we remember that troops are still protecting and fighting for liberty. They don’t get a three-day weekend to go shopping or have a barbecue.”

Official acknowledgements and letters were presented from elected representatives. Trevor Smith read a letter from Congressman Kevin McCarthy; Liz Mojica gave a message from State Senator Shannon Grove; Brandon Rouque passed along sentiments from Assemblyman Tom Lackey and Michael Clark read a letter from Kern Country Second District Supervisor, Zack Scrivner that not only gave thanks and recognition to those who laid down their lives for our country, but also applauded the citizens of Mojave for their consistency in observing Memorial Day and paying homage to those who have served their country and community.

“I didn’t serve, I worked in the industry, but I appreciate all who did serve,” said Steve Ericson, the keynote speaker, who delivered an emotional talk about his family’s military service. Ericson is an aerospace engineer and is director of Advanced Design at TheSpaceShip Company at the Mojave Air and Spaceport. Previously, he worked at Lockheed Martin Skunk Works, working on systems for stealth aircraft and also worked on systems for several aircraft carriers. He came from Kansas to Mojave more than 30 years ago to work at Scaled Composites. 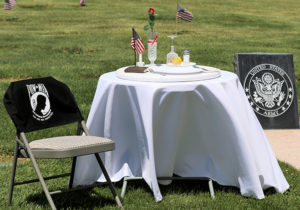 “I want to tell you about Edna, my great-grandmother. She served in the U.S. Army as a nurse and died in 1911. She was on the Trail of Tears and served with Kit Carson,” he said as his voice waivered. “My dad and his two brothers served in World War II, the oldest brother worked for the Navy and to this day, we have no idea what he did,” Ericson said. “It was classified and he never told anyone what he did.”

“The second brother was five years older than my dad and he flew B-24s and has never talked about it,” Ericson said. “My dad doesn’t talk about it either. He was in what was known as the ‘forgotten 103rd’ infantry and landed in Marseilles in 1944 and what he did tell me, they walked the ‘champagne tour’ of France, with 15,000 troops and had one-third casualties.”

“In the Ardennes, they met up with the Battle of the Bulge and he fought his way into Germany,” said Ericson. The German forces were strong and they had to fight again to get back into Germany. “Through attrition he became the leader of his platoon and he spent all morning approaching a target in France which was a few buildings and a four-way intersection. I later visited that place” Ericson said “My dad didn’t carry the M-1, he carried a Mauser, (a German World War II bolt-action rifle) because it had better accuracy and range,” Ericson explained.

“There was a German truck parked outside of one of the buildings and he decided to fire a round at that truck and it blew up,” said Ericson. “If you’ve ever watched the show ‘Band of Brothers’ or ‘Saving Private Ryan,’ the words my dad told me is that they were too real.”

“Dad was at Berchtesgaden and at the Kehlsteinhaus, Hitler’s Eagle’s Nest when they found out the war had ended,” he said. “And they were all looking for wine and stuff, but he couldn’t get orders to get home, so he spent an additional year in Innsbruck, Austria, trying to get home.”

Ericson explained that his dad never would condone any whining from the kids, he expected good behavior without any complaints. However, when the family was moving him into a care facility, a letter was found that his dad had written home when he was stuck in Austria without orders to return home. “Dad was whining like a kid,” said Ericson. “Of course, he was only 21 and he was stuck in Europe and couldn’t get home. He was complaining about how incompetent his leaders were and how they hadn’t fought in combat like he had.”

“I never knew that side of my dad,” Ericson said. “He was whining and it really made me feel good and more comfortable about myself.”

“My dad is 95-years-old now and doing well,” said Ericson. “He and his brothers survived the war and made it back and raised their families, like some haven’t done,” he said. “We were very fortunate.”

“He got his pilot’s license when he was 65, waiting for all of us kids to be out of school, he still flies model RC airplanes,” Ericson concluded. “God bless him and all who served.”

Mojave Gold Star Mother, Hilaria Hannon was recognized with bouquets of red, white and blue flowers. Hannon’s son, Marine Pfc. Fernando Hannon, 19, was killed in an explosion in Al Anbar Province in Iraq in 2004 while serving as a rifleman with the 1st Marine Division. Fernando was the fifth generation of his family to serve in the U.S. military.

Sally and Ken Kendall presented the POW/MIA Remembrance Table and asked everyone to remember our prisoners of war and those missing in action.