At least seven people have died when a World War II-era B-17 crashed in a fireball as it tried to land about 10 a.m. Oct. 2 at New England’s second-busiest airport, seriously injuring at least six people aboard, officials said.

Black smoke rose from the airport as emergency crews responded to the crash of the B-17G Flying Fortress at Bradley International Airport in Windsor Locks, Conn., just north of Hartford. 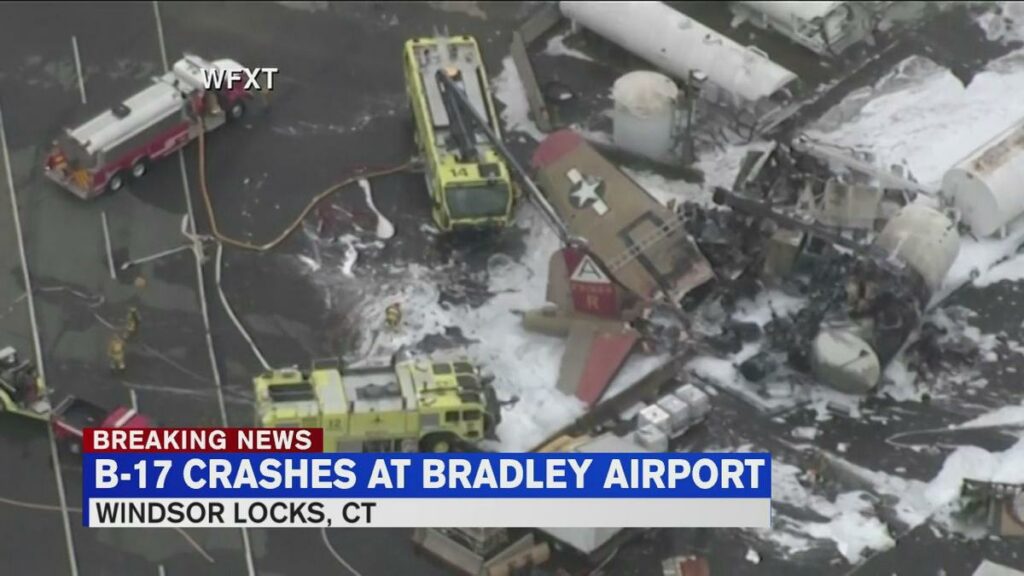 Thirteen people were on board: the pilot, the co-pilot, an attendant and 10 passengers, state officials said at an early-afternoon news conference. One person in a maintenance building also was injured.

Six people on board were taken to Hartford Hospital, said hospital spokesman Shawn Mawhiney, including one who was airlifted to the hospital. He did not yet have information on their condition.

The B-17 had been trying to land, the Federal Aviation Administration said on Twitter. It was civilian-registered and not flown by the military, the FAA said.

The New England Air Museum is near the airport. The plane was associated with the Collings Foundation, of Stow, Mass., an educational group that brought five of its “Wings of Freedom” vintage aircraft display, two World War II fighter planes and three bombers, to Bradley International this week. The aircraft were open to tours and flights aboard the aircraft were also available to the public.

Antonio Arreguin said he had parked at a construction site near the airport for breakfast when he heard an explosion. He said he did not see the plane but could feel the heat from the fire, which was about 250 yards away.

“In front of me, I see this big ball of orange fire, and I knew something happened,” he said. “The ball of fire was very big.”

A smaller explosion followed about a minute after the first blast, he said. He saw emergency crews scrambling within seconds.

“Our thoughts and prayers are with those who were on that flight, and we will be forever grateful to the heroic efforts of the first responders at Bradley,” the Collins Foundation said in a statement.

“The Collings Foundation flight team is fully cooperating with officials to determine the cause of the B-17 crash and will comment further when details become known.”