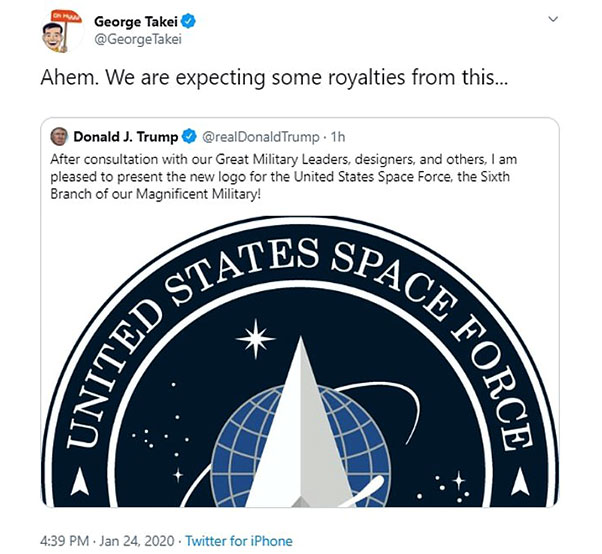 “After consultation with our Great Military Leaders, designers, and others, I am pleased to present the new logo for the United States Space Force, the Sixth Branch of our Magnificent Military!” Trump wrote on Twitter.

The new logo draws some inspiration from the now defunct Air Force Space Command logo, but social media posts said it looked a lot like the Star Trek logo. George Takei, a star of the original Star Trek series, tweeted “Ahem. We are expecting some royalties from this.”

Air Force Space Command was redesignated as the U.S. Space Force as an initial step in establishing the service.

The new, independent U.S. Space Force will maintain and enhance the competitive edge of the DOD in space while adapting to new strategic challenges.

Ground-based and space-based systems monitor ballistic missile launches around the world to guard against a surprise missile attack on North America. A global network of space surveillance sensors provide vital information on the location of satellites and space debris for the nation and the world. Maintaining space superiority is an emerging capability required to protect U.S. space assets from hostile attacks.