Some people know something about most everything. Others know nearly everything about something. But when the question is about airplanes and aeronautics, Cam Martin either already knows, or knows who does.

Cam grew up to be a career communicator for the National Aeronautics and Space Administration, working to EXPLAIN X-PLANES and the wonders of aeronautics. Despite the daily efforts to reach out to audiences local and global, generalist and specialist, professional and recreational, Cam maintained a low key, nap-of-the-earth profile throughout his career with NASA.

Living in retirement in Tehachapi, Calif., and fully engaged in family, lecturing, flying sailplanes, serving as a volunteer for the Experimental Aircraft Association, and taking active roles each summer in the EAA’s Oshkosh AirVenture Convention and Fly-in, Cam found time to sit for this portrait in words.

The story of how Cam came to the High Desert of California in 1995 as Chief of the Office of External Affairs at NASA’s flight research center begins with his 1990s video conference presentation on why the “Space Agency” side of the NASA brand dominated popular culture while” Aeronautics,” the first capital “A” in the acronym, was less recognized.

Aware of the reputation a mid-level manager could get for delivering what might be unwelcomed news to senior executives, Cam briefed the data which pointed out a blunt truth. In comparing the pre-internet era communications work of NASA’s aeronautics group with what was then being done by the agency’s planetary exploration, human space flight, and space science divisions, the aeronautics side was conspicuous by its lack of publications, high impact imagery and project histories for documenting and telling the stories of its accomplishments.

Underscoring the point, Cam said if someone asked a typical man on the street what the big “S” stood for in NASA’s name, the immediate response would be “Space.” Ask the same question about the “A,” and you’d get a look of confusion. Even excellent work cannot speak entirely by itself. A partial solution, he suggested, was to start filling the aeronautics information vacuum with stories giving the public a chance to see and hear what was going on in NASA’s first “A.” With a little luck, it might rekindle the kind of interest and enthusiasm generated in the rocket plane era of “The Right Stuff.”

One person on the conference call that day was Kenneth Szalai, then the NASA Flight Research Center director at Edwards. He invited Cam, then happily employed at NASA Langley in Virginia, out to California for what turned into a life-changing job offer.

Cam sees what he calls his own ongoing passion for flight in the faces of many people who come to this region to join a team, build infrastructure, invest, solve problems and take new technology to flight.” You can just go down the list of milestone accomplishments at Edwards AFB, NASA, Mojave Air and Space Port, the companies at Plant 42. Stuff happens here. There’s a pulse and a synergy in this region that crosses over all those institutional boundaries.”

He continues, “This region is filled with people who have a passion for flight. These are people who go out of their way to choose to come to this valley, Edwards and Mojave,” as he did. And Cam adds, “It’s a pretty good bet they didn’t make that choice based just on the scenery.”

Cam explains, “A successful undertaking has both the pen and the sword. Wilbur and Orville Wright were successful pioneers when others were not because they studied, they built, they flight tested, and then they fixed problems, not just once, but over and over. Their disciplined testing in 1899, 1900, 1901, and 1902 showed them exactly what they needed to do to make history at Kitty Hawk in 1903. “

For the 2003 Centennial Celebration of the Wright Brothers’ first flight, legendary engineer and NACA rocket test pilot Scott Crossfield coached a team that flew a replica of the machine the Wright Brothers flew at Kitty Hawk, N.C., 100 years earlier.

Cam remembers Crossfield saying on a visit to the center after the historical reenactment, “The Wright Flyer was the worst airplane that ever flew.” But it DID fly, and that was what mattered.

Those same processes are alive and well out on the Mojave Desert. In Cam’s words,” Build something and get it flying sooner rather than later.” That approach separates the real problems from the imaginary ones, and reveals important, unexpected things that were overlooked.

It was the pioneering namesake of the Antelope Valley’s NASA Hugh L. Dryden Aeronautical Test Range who said almost exactly that seven decades ago.

Cam still has a passion for telling stories that matter, and after three decades his license plate still reads “XPLANES”, a noun, and a tongue-in-cheek misspelled verb.

In 2018, some months after Cam Martin’s retirement from NASA’s Neil A. Armstrong Flight Research Center, Congressman Kevin McCarthy read into the Congressional Record a summary of Martin’s career that reflected the Kern County lawmaker’s long working relationship with Cam. The text read in part:

“Cam distinguished himself as a man who truly loved what he did, and he never failed to inspire an interest in aeronautical science with those who worked with him. “

Looking back at what happened in the years that followed in the California center’s External Affairs Office, Cam remembers a question he asked himself early on. “I still had my 1st Grade Weekly Reader newspaper with the X-15 on the front. ‘Pilots will fly to space.’ Yes, the world’s coolest airplane was the stuff of history, seen only in museums, but how could I NOT want to go to the place where they had flown the X-15?”

Once in a while, fate smiles. Having consulted on the X-15 scenes for the Neil Armstrong biopic movie” First Man,” Cam was on the set for filming along with veteran X-15 pilot Joe Engle. Cam remembers thinking, “This really is Edwards AFB. This really is the lake bed. And that sure looks like a real X-15. I never expected to see anything like this. Seems like I did not miss the X-15 after all.”

Editor’s note: This is part one of a three-part series. Look for Part Two, Born with flight in his DNA, in the next issue of Aerotech News and Review. 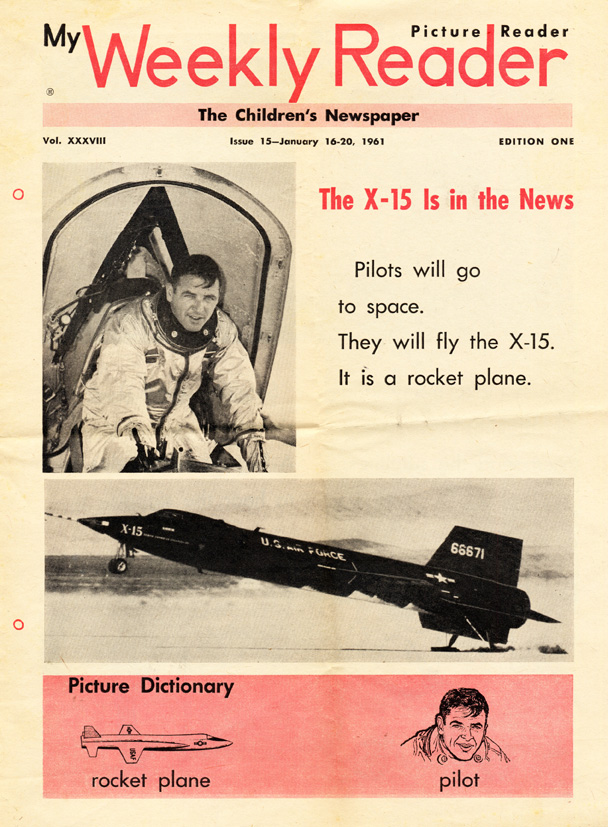