Managers and directors of Los Angeles County’s five general aviation airports want to devise a fresh marketing strategy to win friends, influence people, and attract customers for revenue. So, the question confronting the County Airports Commission’s September meeting was: How do we do it?

As a starting point, newly-appointed head of the Aviation Division of the Department of Public Works, Arthur Vander Vis, suggested consulting “A Marketing Guide for Small Airports,” and defining at the outset, “What are the goals? Who are the target audiences? What are the messages and the methods to communicate? What kind of budget will it take, and how will the airports measure success?

Going by the book, Vander Vis outlined what he called examples of goals in creating a marketing plan, first defining intended outcomes, followed by a SWOT analysis, which examines Strengths, Weaknesses, Opportunities, and Threats to the airports. Using the foregoing information, he said planners would need to revise goals to reach target audiences, select the tools to reach them, execute the plan, and then monitor and evaluate results.

Comments by commissioners and members of the public, all participating via Zoom in the virtual session, focused on messaging to influential organizations and individuals already engaged with the airports, as well as businesses, non-profits, and governmental organizations with needs airports can provide.

Although discussion of the proposed marketing initiative began with a countywide focus, the differences between the five-county airports emerged in detail in this most recent public airing. Earlier in the meeting, Vander Vis reported on federal grants to airports, primarily related to COVID-19 relief. The amounts varied significantly. Gen. William J. Fox Field in North Los Angeles County received $32,000, while one county-run airport in the unincorporated L.A. metropolitan area received $241,000.

The point that beyond sharing airplanes, runways, hangars, and other flight fundamentals, the point that county airports are distinctly different is illustrated in a 2020 Economic Impact Analysis.

The economic study portrays the Aviation Division of the Los Angeles County Department of Public Works as a kind of foster parent to a family of airports with little in common and financial conditions ranging from rags to riches.

Most of the airports are elderly, with the youngest, Fox Field, having opened in 1959, and the two eldest, Compton and San Gabriel Valley in El Monte, created in 1924 and 1936, respectively. Brackett Field in Laverne opened in 1940, and the San Fernando Valley’s Whiteman Airport began privately in 1946 and was taken over by the county in 1970.

While other more urban county airports are encroached by development, Fox Field’s economic impact estimate may not be recognized for indirect economic growth with the development of business and industry on 8,000 acres master-planned by the City of Lancaster for construction of large-scale facilities.

In a concluding discussion at the Sept. 29, commissioners and public members aired suggestions on various organizations and individuals positioned to assist in marketing airports for improvements and stability, including non-profit groups such as Experimental Aircraft Association (EAA), Aviation Explorer Posts, and Civil Air Patrol Squadrons, as well as municipal and regional economic development organizations, new and legacy media, and educational institutions with missions involving technology and aerospace career preparation.

Vander Vis showed a video promoting the Antelope Valley Community College aerospace technology careers program operating in a 10,000-square-foot hangar at Fox Field. In the video, Ed Knudson, college president, said the institution he heads in one of only 15 community colleges in California to grant bachelor’s degrees. 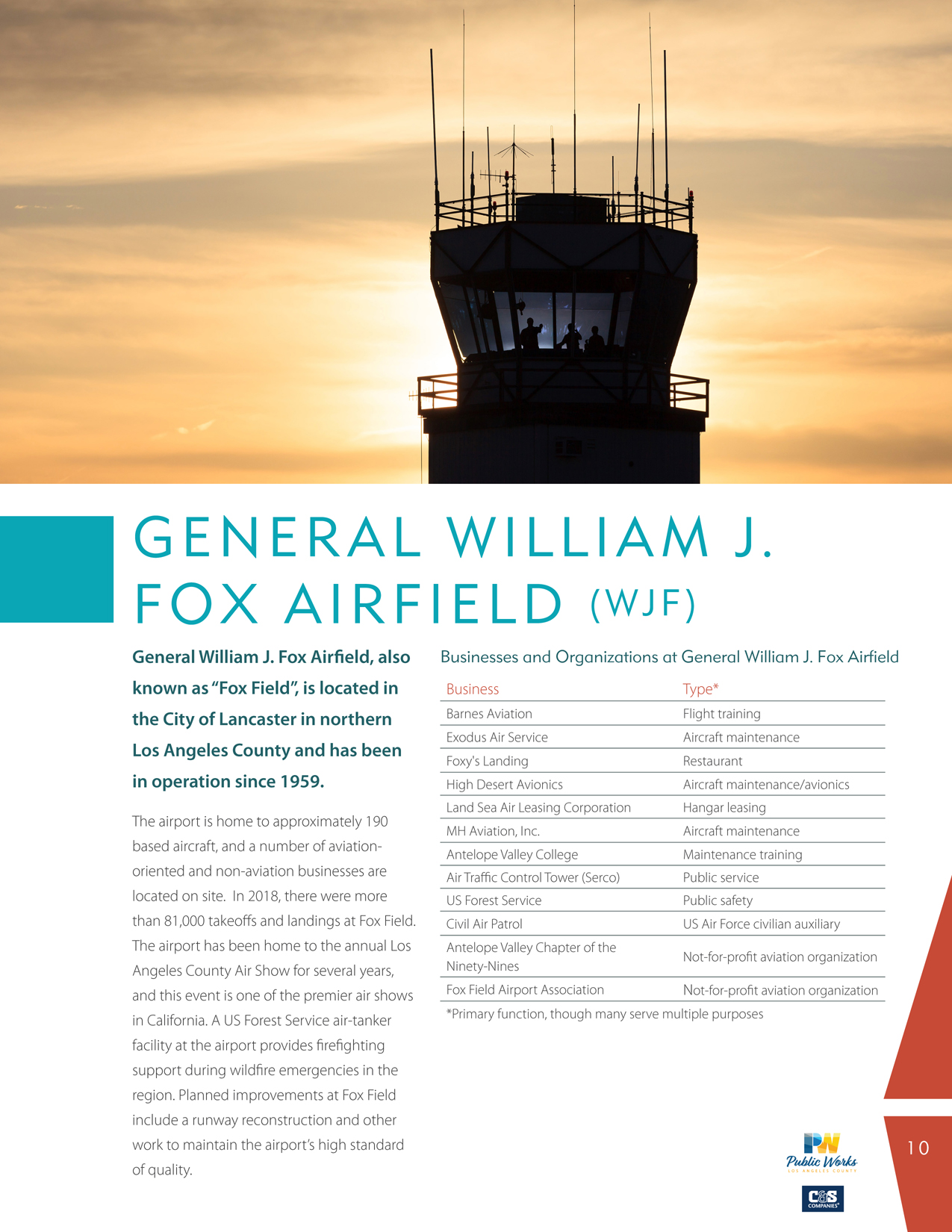