A model of the X-59 aircraft, the centerpiece of NASA’s mission to gather information intended to help enable a new era of commercial faster-than-sound air travel over land, recently completed a round of testing in a wind tunnel in Japan.

NASA and the Japan Aerospace Exploration Agency (JAXA), under an agreement signed in December 2020, conducted independent wind tunnel studies of the 1.62 percent scale model of the X-59. Under a separate agreement, Boeing also participated in both of these tests. The test at JAXA was an opportunity to collaborate with international and industry partners and allowed the NASA research team to acquire tunnel-to-tunnel comparisons prior to the first flight of the X-59 aircraft. 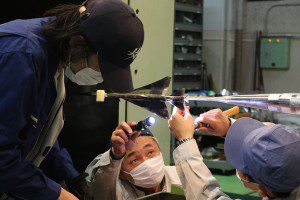 When an airplane travels at supersonic speeds, waves of changing air pressure are created that we perceive as sounds called sonic booms. The shape of the X-59 is designed to reduce these shock waves, so the perceived sound is little more than a thump — if you hear anything at all.

To test the X-59’s design, researchers placed a scale model in a JAXA wind tunnel and took measurements of the pressure waves as the supersonic airflow passed over the model to see if they behave as predicted. This test data can sometimes vary, even when running the same test with the same model. Likewise, putting the model in a different wind tunnel could result in a different version of the data.

“But that’s a good thing. By using the same model in both wind tunnels, we can improve our certainty in the data obtained and increase our understanding of the X-59’s design,” said Melissa Carter, a senior researcher with NASA’s Commercial Supersonic Technology project.

By comparing the data previously gathered from wind tunnel tests at NASA facilities with the data now gathered from the JAXA test, researchers are able to better understand and predict how the air will react when the X-59 takes flight.

Due to COVID-19 travel restrictions, NASA researchers were unable to participate in person for the test at JAXA. Members of NASA’s test team instead traveled to Boeing in Seattle where a “virtual control room” was setup for the test. This setup allowed the NASA team to participate in the testing alongside the Boeing test team and better leverage Boeing’s prior knowledge and experience testing in the JAXA facility.

Preliminary data analysis indicates the pressure signatures are of good quality with well-defined and repeatable features. NASA plans to participate in a follow-on computational prediction workshop with both Boeing and JAXA later this year.