Army Staff Sgt. George John Hall had been near Anzio, Italy for about two months in 1944 when he faced one of the toughest days – and decisions – of his life.

After singlehandedly taking out two enemy positions to help his unit move forward, Hall had to self-amputate his leg to survive. His bravery and fearlessness earned him the Medal of Honor.

Hall was born on Jan. 9, 1920, in Stoneham, Mass.. He attended only one year of high school before dropping out to help his father, William, work on the family farm. He joined the Massachusetts National Guard in his later teens and was discharged from there when he joined the U.S. Army in 1940.

Hall received training in Panama and served at a few U.S. installations, including Fort Hamilton, N.Y., where he met and married his wife, Elizabeth. He was then sent overseas to fight in World War II’s Italian campaign, which began in September 1943.

As a member of the 135th Infantry, 34th Infantry Division, Hall saw action at the crossing of the Volturno River that October and at the town of Cassino in January 1944. His unit eventually landed in Anzio that March, where he remained fighting the enemy for about two months.

Early on the morning of May 23, 1944, the 34th began its push toward Rome. Hall was with Company B, which was trying to attack the enemy across flat, open terrain. Shortly after the assault began, his unit was pinned down by fire from three machine guns and snipers.

Hall was at the front of his platoon, so he volunteered to try to destroy the machine gun nests. Despite the intense enemy fire, Hall crawled about 60 yards along a plowed trench to get within hand-grenade range of one of the guns, then tossed four into the nest. When the smoke cleared, Hall found two dead Germans and four other stunned enemy soldiers. Hall ordered them to crawl back to the U.S. lines to surrender, which he said they did.

Hall found himself in range of the next machine gun position, so he kept going. He was out of grenades, but he luckily came across several German explosives, known as “potato mashers” due to their kitchen utensil-like shape, in the first machine gun nest he’d cleared.

So, Hall engaged the enemies at the second position in a deadly exchange of grenades. Each time he exposed himself to throw one, the Germans fired machine-gun bursts at him and threw more grenades back. The vicious duel finally ended in Hall’s favor with five enemies surrendering and five others dead. Hall sent those prisoners back to the U.S. line, too.

He then turned his attention to the third machine gun nest about 50 yards away. Again, Hall crawled along a trench as the enemy frantically fired at him. As he closed in on the last enemy position, the Germans concentrated their artillery on the area. A shell burst pulverized Hall’s right leg. He said in a 1945 War Department news release that it just about cut off his right leg, and his left foot was also badly injured.

“As soon as I saw what had happened to my leg, I knew I couldn’t go forward anymore,” Hall explained in the news release. “I turned around and started to crawl back. It was about 75 yards to our men.”

But he said he just couldn’t make it.

“Every time I tried to drag my leg, the pain was so great I had to give up. I yelled for a medic, but there was so much noise nobody could hear me,” Hall said. “I lay there and rested awhile to gather my wits. I was still under fire, and I knew I would have to do something … So, I pulled my sheath knife out and cut through the two tendons that were holding my leg on.”
To survive, Hall cut off his own leg.

“I was able to crawl after that,” he said. When Hall finally made it to safety, medics stopped the bleeding with a tourniquet and gave him a sedative.

As Hall was carried away to get better medical treatment, his fellow soldiers said they heard him complaining about not having wiped out the third enemy position. So, they took up where he left off. Hall’s platoon knocked out the remaining gunner’s nest with minimal losses and move forward toward their objective. Hall’s fearlessness and determined fighting spirit made that possible.

Hall was initially hospitalized overseas before being sent home in mid-July 1944 to receive treatment at Walter Reed Army Medical Center. There, doctors also had to amputate his left big toe.

Hall was discharged from the Army on Jan. 16, 1945. He and his wife lived in Brooklyn, N.Y., after his return and had two children, William and Ruth, according to his obituary in the Boston Globe.

On April 6, 1945, Hall received the Medal of Honor from Army Maj. Gen. Sherman Miles at a ceremony on the Boston Common. A few months later, he was appointed as a local contact representative for the Veterans Administration, according to a Boston Globe article.

Unfortunately, Hall’s post-war life was cut short by complications related to his injuries at Anzio. He died on Feb. 16, 1946, nearly two years after that day in battle. He was 26. 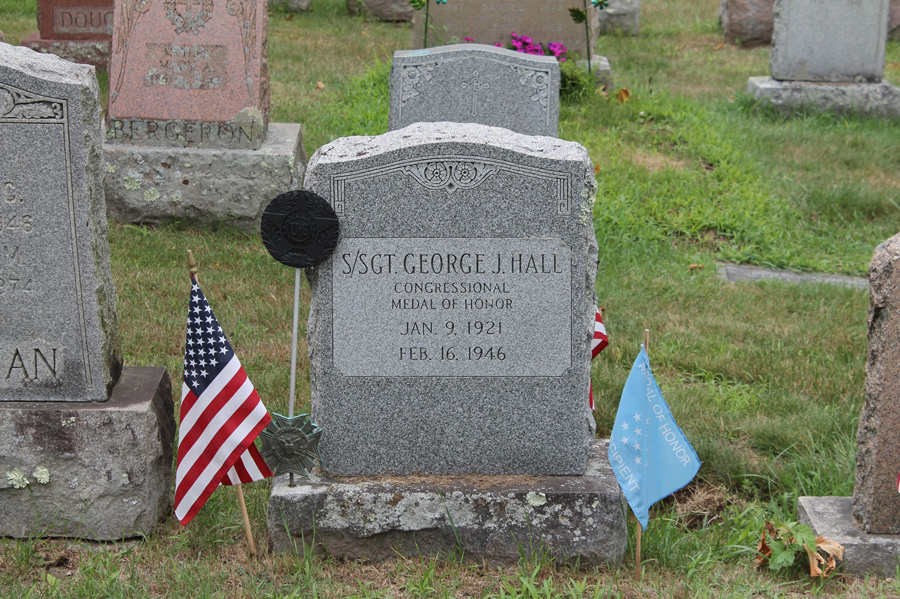 Hall chose to be buried in St. Patrick’s Cemetery in his hometown. Three of his four brothers, all of whom also served in World War II, were able to attend.

The town of Stoneham remembers the young staff sergeant’s contributions to the war effort with the Veterans of Foreign Wars Post 620 and a community pool, both of which bear his name. Hall’s Medal of Honor is also housed in the Stoneham town hall.