Navy Boatswain’s Mate Patrick Mullen is one of only 19 Medal of Honor recipients who earned the military’s highest honor twice.

While his actions that led to both awards were only about six weeks apart, only one was earned during the Civil War.

Mullen was born in Ireland on May 6, 1844; however, his family immigrated to the United States when he was a young boy, and they settled in Baltimore, Md. His last name was originally spelled Mullin, but he changed it to Mullen when he joined the Navy.

By the end of the Civil War, Mullen was a boatswain’s mate aboard the USS Wyandank. The Wyandank was a steamer used by the Union Navy as a storeship and barracks for the Potomac Squadron, which was tasked with blockading Confederate waterways.

Mullen earned his first Medal of Honor on March 17, 1865 — St. Patrick’s Day — while the ship was in the area of Mattox Creek, Va.
Mullen was part of a cutter crew during a boat expedition when it came under heavy attack by a few hundred Confederates. According to his citation, he helped his commanding officer by taking charge of the boat’s only howitzer. Lying on his back, Mullen loaded the weapon and expertly fired it at the enemy, killing and wounding several of them. The blast led to a Confederate retreat, which saved the lives of his comrades.

Mullen earned his second Medal of Honor about six weeks later. However, he earned it after the war, which officially ended on April 9, 1865.

This time, Mullen was on the USS Don, a cargo ship captured from the British a few years prior that was fitted for service to patrol the Potomac. On May 1, 1865, the steamer attempted to pick up the crew of a smaller vessel, Picket Launch No. 6, which had begun to fill with water. 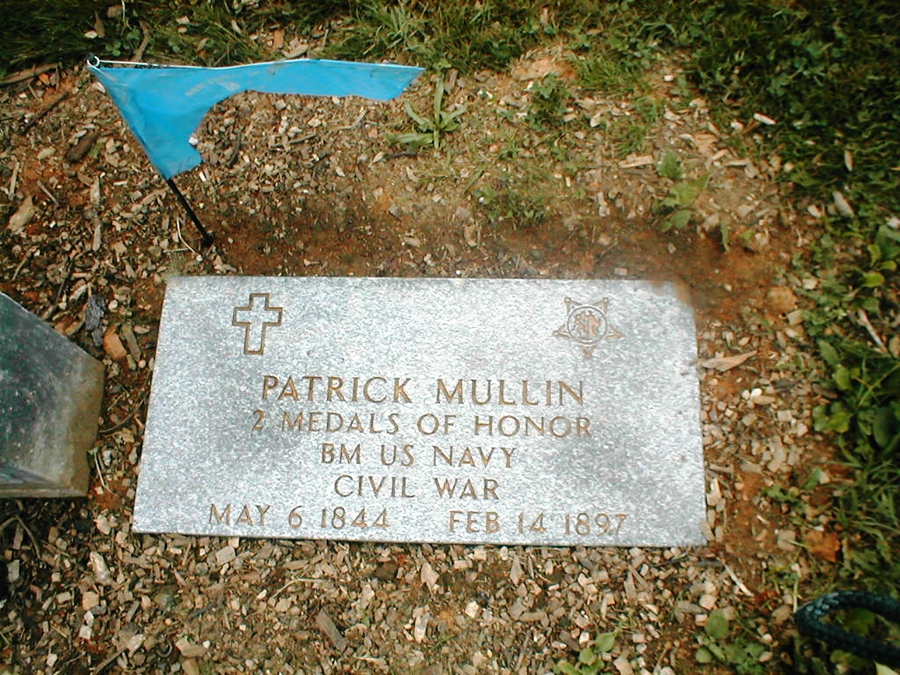 During the rescue, Mullen noticed an officer struggling in the water. As the man sank below the surface, Mullen jumped overboard and brought the officer to the boat to save him from drowning. For his bravery, the young sailor received a bar to wear on his Medal of Honor that he’d already received from his first citation.

Few details about the rest of Mullen’s life can be found online. He had a wife named Emma and two sons, Edward and William, who were born in or after 1881. National Archives records show he applied for a pension in the 1890s after filing a disability claim, but it was denied because he failed to show for a medical exam.

Mullen died on Feb. 14, 1897, in his adopted hometown of Baltimore. He was buried in the city’s New Cathedral Cemetery.

Mullen’s Medal of Honor is housed at the American Numismatic Society in New York.