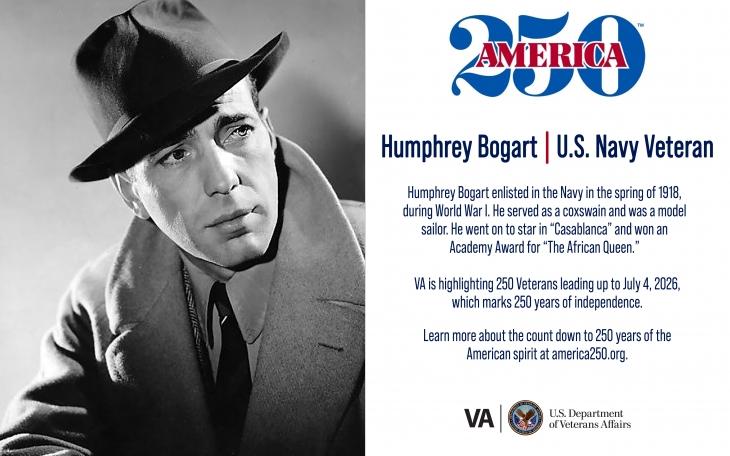 For Humphry Bogart, joining the Navy helped him decide what career he wanted to pursue in life.

Bogart was born in December of 1899, in New York City. His parents were both prominent socialites.

Bogart’s father, Belmont DeForest Bogart, was a prominent heart surgeon. His mother, Maud Humphrey, was a distinguished painter and the artistic director of The Delineator, a woman’s fashion magazine at the time.

Bogart had his own moment of fame when his mother used one of her many drawings of Bogart in a national advertising campaign for Mellin’s baby food. It would seem that the two had a close relationship; however, that was far from the case. Neither of them saw eye-to-eye, and Maud never developed a fondness for her son. Bogart once said: “If, when I was grown up, I had sent my mother one of those Mother’s Day telegrams or said it with flowers, she would have returned the wire and flowers to me, collect.”

Bogart’s education was mostly spent at Trinity School in New York, a very prestigious school for the social elite. Bogart was a poor and disheartening student. He found his interests aligned more with his hobbies such as playing chess and sailing. He continuously earned bad grades and was his classmates mocked him and said that he would amount to nothing in life. Despite his poor academic performance, his father enrolled him in the Philips Academy in Andover, Mass., the same school where the second president of the United States, John Adams, had served as headmaster. Bogart failed to meet any academic standards and the school expelled him the next spring.

Unsure of what to do with himself or what type of career he wanted to pursue, Bogart joined the Navy.

He completed his training at Pelham Bay Naval Training Station in the Bronx, N.Y.

The most notable event of Bogart’s Navy career occurred when he received a scar above the right corner of his upper lip, a feature that came to define his acting career later in life as the tough guy. The stories of him earning the scar vary and are completely shrouded in mystery. The accepted notion of the tale describes Bogart as acquiring the scar while escorting a prisoner; the prisoner asked for a cigarette, and when Bogart reached into his pocket for a match, the prisoner bashed him with his handcuffs. The prisoner then attempted to flee but was unsuccessful.

Bogart honorably discharged in 1919. A year after his discharge, Bogart met a stage actress by the name of Alice Brady, who helped him land a job as the company manager of a touring production for “The Ruined Lady.” A year later, Bogart participated in a production called “Drifting,” where he had only one line. Bogart’s father attended one of the shows and whispered to the person sitting next to him, “The boy’s good, isn’t he?” Thus, Bogart’s career in acting began.

Bogart eventually starred in many movies in minor roles, such as “Nerves” and “The Skyrocket,” but he had his big break in 1936 with an outstanding performance in Archie Mayo’s “The Petrified Forest,” a movie based off Robert Sherwood’s 1935 Broadway drama. He further starred in crime films, including “The Great O’Malley,” “Dead End,” “Crime School” and “The King of the Underworld.” He then starred in the masterpiece, “The Maltese Falcon,” and later the romance, “Casablanca.” His most celebrated role came in 1951 with the “African Queen,” where he co-starred with Katherine Hepburn. He received an Academy Award for the performance. Bogart starred in over 80 films.

Editor’s note: America250 — The Veterans Administration is highlighting 250 Veterans leading up to July 4, 2026, which marks 250 years of independence.