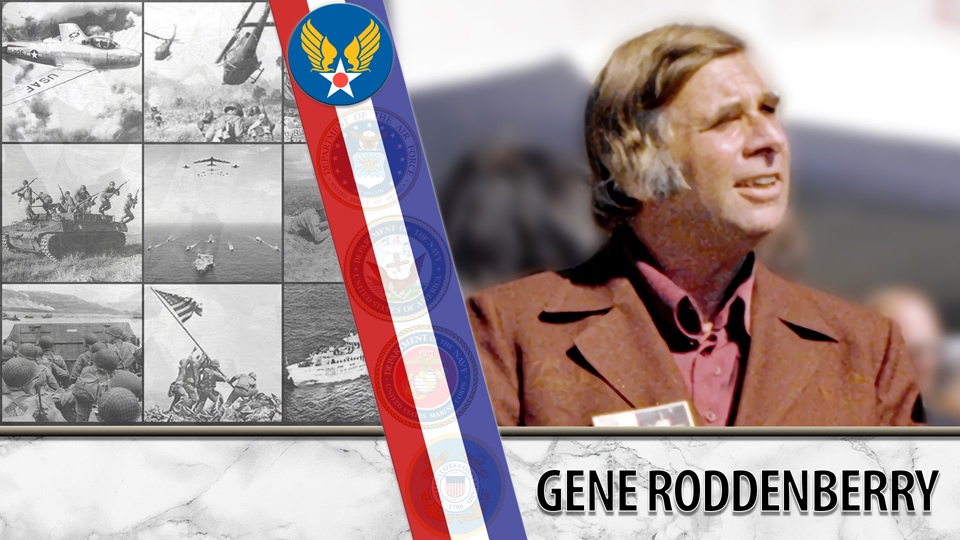 Eugene Wesley Roddenberry was born in El Paso, Texas, in August 1921. His family moved to California in 1923, where his father became an officer for the Los Angeles Police Department.

In his youth, Roddenberry enjoyed reading the popular science fiction of his day.

Roddenberry had planned to become a police officer like his father, but he was also interested in flying. He joined the Civilian Pilot Training Program, an initiative by the U.S. Army Air Corps to recruit pilots in anticipation of America’s entry into World War II. He earned his pilot’s license in 1940 and joined the Air Corps in December 1941, less than two weeks after Japan attacked Pearl Harbor. He received his commission as a second lieutenant in 1942.

During World War II, Roddenberry flew a total of 89 combat missions. He flew with the 394th Bomb Squadron, 5th Bombardment Group of the 13th Air Force in Oahu, Hawaii. Roddenberry piloted a B-17 “Flying Fortress” named the “Yankee Doodle” and took part in the Battle of Guadalcanal. While stationed in the Pacific, he also practiced his writing, submitting pieces to newspapers and magazines.

In 1943, the “Yankee Doodle” overshot the runway and crashed before takeoff, killing two members of the flight crew. Although an investigation absolved Roddenberry of any responsibility, he was reassigned to the United States and spent the rest of the war investigating aircraft crashes for the military. He also survived a second crash, this time as a passenger. Roddenberry was honorably discharged in 1945 with the rank of captain, having been awarded both an Air Medal and a Distinguished Flying Cross.

After the war, Roddenberry became a commercial airline pilot. In 1947, while he was “deadheading” as a passenger aboard a flight, Roddenberry’s plane crashed in the Syrian desert, killing many aboard.

Roddenberry and the remaining flight crew helped to pull other survivors from the wreckage. However, after living through his third plane crash, he decided that flying was simply too dangerous and chose to pursue a writing career.

Roddenberry fulfilled his original career goal by joining the LAPD, where he both served as a police officer and worked as a speechwriter for the chief of police. He continued to practice his writing while reading science fiction and listening to radio dramas, hoping to break into the emerging television market. He remained with the LAPD until 1956, when he resigned to become a full-time writer.

Over the next decade, Roddenberry penned scripts for many network television series. In 1964, he began pitching an idea for a science fiction show of his own: “Star Trek,” which premiered in 1966.

Roddenberry presented an optimistic view of the future, one in which humanity not only explored outer space but had managed to solve many social and political problems. World peace had finally been achieved; hunger, poverty and disease had been eliminated; discrimination and xenophobia were forgotten. The diverse cast, which included Black and Asian characters in starring roles, later inspired future astronauts like Frederick D. Gregory, Ronald McNair and Mae Jemison to go into space. Racial issues were never discussed on the show because in Roddenberry’s vision of the future, racism no longer existed.

“Gene Roddenberry’s greatest contribution to the conversation of diversity in the future,” said television producer Alex Kurtzman, “is that diversity is never addressed in ‘Star Trek.’”

“Star Trek” was not a hit when it was first broadcast; the show only lasted for three seasons and was canceled in 1969, the same year that the Apollo 11 astronauts landed on the moon. But the series did well in syndication and developed a loyal fan following.

In the 1970s, when the National Aeronautics and Space Administration was preparing to debut the first space shuttle, it was named “Constitution.” However, tens of thousands of “Trekkies” flooded the White House with letters asking President Gerald Ford to rename the shuttle “Enterprise” after the fictional spacecraft on “Star Trek.” President Ford agreed, and on Sept. 17, 1976, when Space Shuttle Enterprise made its first public appearance, Roddenberry and several members of the “Star Trek” cast were on-hand to celebrate.