While Virgin Galactic continues to expand its operations at Space Port America in New Mexico, and in Mesa, Ariz., the company has not turned its back on the Mojave Air and Space Port.

At the Aug. 2 meeting of the MASP Board, the board voted to approve a lease amendment for Faith Hangar.

The proposed amendment, presented by then CEO Todd Lindner, called for combining three existing leases into one, as well as adding additional acreage. As part of the new lease, the company will be adding additional office space and employee parking. 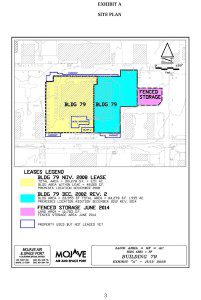 The board approved the new lease agreement that is for five years, with one five-year renewal option. The new lease provides for a monthly rent of $48,344.14.

Galactic Co. LLC dba as The Spaceship Company is the leaseholder. Galactic Co. is a wholly owned entity of Virgin Galactic.

In July of 2022, the company announced that it has signed a long-term lease for a new final assembly manufacturing facility for its next-generation Delta class of spaceships. The facility will be located in Mesa, Ariz., and located next to the Phoenix-Mesa Gateway Airport. The airport is located at the former Williams Air Force Base.

The Delta class spaceship is Virgin Galactic’s production vehicle that is designed to fly weekly, supporting the Company’s target of 400 flights per year from Spaceport America. Based on current schedules, the first of these ships is expected to commence revenue-generating payload flights in late 2025, progressing to private astronaut flights in 2026.

“Our spaceship final assembly factory is key to accelerating the production of our Delta fleet, enabling a rapid increase in flight capacity that will drive our revenue growth.” said Virgin Galactic CEO Michael Colglazier. “We’re thrilled to expand into the greater Phoenix area which is home to outstanding aerospace talent ñ and we look forward to growing our team and fleet at our new facility.”

The facility is already under construction and is expected to be fully operational by late 2023. Final assembly manufacturing processes at the facility will be underpinned by a digital twin architecture, which enables seamless integration between the Company and suppliers allowing for real-time collaboration, strong governance, and an increase in production efficiency and reliability.

And on Aug. 1, the company announced it had acquired land in Sierra County, New Mexico, to build a new astronaut campus and training facility.

The location is close the company’s commercial operations headquarters.

The master plan for the campus will include training facilities, purposeful accommodations, and tailored experiences as well as an observatory, wellness center, recreation activities, and unique dining options. Situated near Spaceport America, the campus will sit atop a mesa overlooking the New Mexico landscape.