The Medal of Honor was awarded to the remains of nine unidentified service members.

These include the four unidentified U.S. service members, eventually buried at the Tomb of the Unknown Soldier and its three crypts at Arlington National Cemetery in Virginia, as well as five unidentified World War I recipients from Great Britain, France, Belgium, Italy and Romania.

Each medal is inextricably linked to the Tomb of the Unknown Soldier. Last year marked the centennial of the Tomb’s creation in 1921 and included major anniversary events and special projects.

In October 1921, one unidentified U.S. service member who died in World War I was chosen at random to represent “the soul of America and the supreme sacrifice of her heroic dead,” according to legislation authorizing the burial. On Nov. 11, 1921, a ceremony was held at ANC’s newly built Memorial Amphitheater to inter this service member in a newly created, temporary tomb. President Warren G. Harding bestowed the Medal of Honor upon the casket during the funeral ceremony.

During the ceremony, several foreign awards were also presented to the Unknown Soldier, including the Belgian Croix de Guerre, the French Croix de Guerre and Medaille Militaire, Great Britain’s Victoria Cross and the Italian Gold Medal for Bravery. Romania, Czechoslovakia and Poland also presented their highest honors for military valor. The permanent Tomb was not completed until 1932.

The other three U.S. Medals of Honor came later as unidentified service members were chosen to represent the fallen of World War II and the Korean and the Vietnam wars.

Since World War II and Korea were fought within a relatively short time span, a dual funeral was held for the pair on May 30, 1958. President Dwight D. Eisenhower presented a Medal of Honor for each Unknown Soldier at the ceremony.

In 1998, thanks to advances in DNA technology, the Defense Department positively identified the remains of the Vietnam War Unknown Soldier as those of U.S. Air Force 1st Lt. Michael J. Blassie. At the request of his family, Blassie was reburied at Jefferson Barracks National Cemetery in Missouri; however, the empty crypt in Arlington still honors all missing and unaccounted for personnel from the Vietnam War.

Living Medal of Honor recipients have also played a large role in these burials. Tim Frank, an ANC historian, said recipients played special roles during the funerals for each Unknown. For example, Army Master Sgt. Ernest Kouma, a Korean War Medal of Honor recipient, presented a folded flag to Eisenhower during the dual 1958 ceremony. Retired Army SFC Ronald Rosser, another Korean War recipient, presented then-Vice President Richard M. Nixon with the flag that draped the Korean Unknown’s casket. Marine Corps Sgt. Maj. Allan Kellogg Jr., who earned the Medal of Honor during Vietnam, was chosen to be the person to designate the remains that became the Vietnam Unknown recipient.

The five foreign World War I recipients who are buried overseas represent the unidentified fallen of their nations; however, it’s important to make clear that none of them was a U.S. service member. They were allied soldiers of France, Belgium, Italy, Romania and Great Britain to whom representatives presented the Medal of Honor on behalf of the U.S.

The Medal of Honor for the British Unknown Warrior is on display in Westminster Abbey in London. Frank said a copy of the medal for the Belgian Unknown is buried with that service member. It’s unclear if the other three medals are buried with their respective Unknowns or if they’re on display.

No foreign Unknown service member from any other war has received the award.

“The U.S. is one of the very few — if not the only — countries that buried Unknowns in the Tomb from subsequent wars,” said Allison Finkelstein, ANC’s senior historian. “At Westminster Abbey at the British Tomb of the Unknown Warrior, there was only one set of remains, and that is from World War I. They never added and buried remains from subsequent conflicts. It’s something that makes the U.S. rather unique.”

Frank said bestowing the Medal of Honor upon the foreign Unknown service members is what led to the back-and-forth swapping of honors between nations. 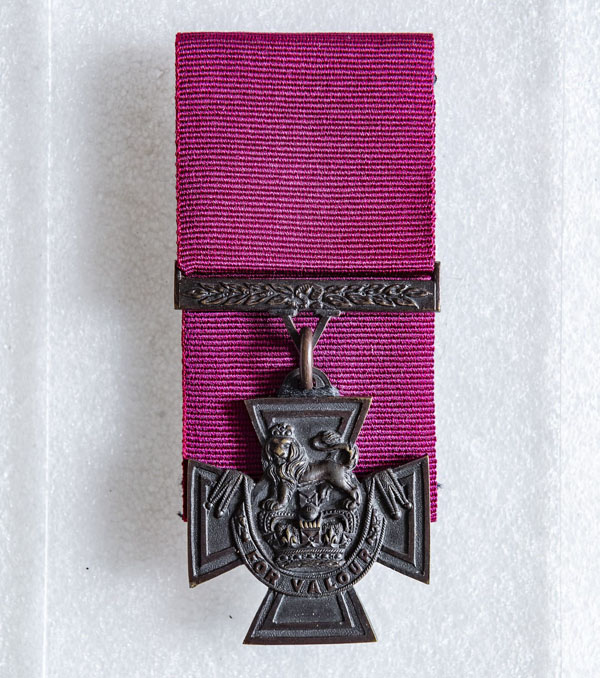 “The Americans presented the Medal of Honor to the [British] Unknown Warrior, and then that started the discussion on the British side of awarding a Victoria Cross to the Unknown American,” he said. The medals presented to the four U.S. Unknown service members remain under the stewardship of Arlington National Cemetery’s history office and are taken care of by civilian historians and curators — not the Army’s 3rd Infantry Regiment, known as “The Old Guard,” which guards the Tomb.

The medals are on display in the Memorial Amphitheater’s Display Room exhibit, located near the Tomb and open to the public. They’re kept under low-level light and undergo basic conservation, ANC historians said.

“The goal of these exhibits is to raise awareness about the history and meanings of the Tomb, and a big part of the exhibit in the Display Room is talking about the Medal of Honor,” Finkelstein said.

Due to advances in technology, historians said there will likely never be another unidentified soldier buried in the Tomb again. These nine Medal of Honor recipients will probably be the last Unknowns to receive this distinction.