NASA released the results of its second agency-wide economic impact report on Oct. 27, 2022, demonstrating how its Moon to Mars activities, investments in climate change research and technology, as well as other work generated more than $71.2 billion in total economic output during fiscal year 2021.

Combined, NASA’s impact supported more than 339,600 jobs nationwide, and generated nearly $7.7 billion in federal, state, and local taxes throughout the United States.
California tops the list with 66,236 employees and output totaling $15.2 billion. Arizona has about 3,876 employees and total output of $7.11 million; and Nevada has 681 NASA employees, and output of $118 million.

“Investment in NASA’s missions is an investment in American workers, American innovation, and American competitiveness for the 21st century. NASA is positioning our partners in commercial space and the national economy to win the future of spaceflight in 21st century as we prepare to return astronauts to the Moon, and then go on to Mars,” said NASA Administrator Bill Nelson. 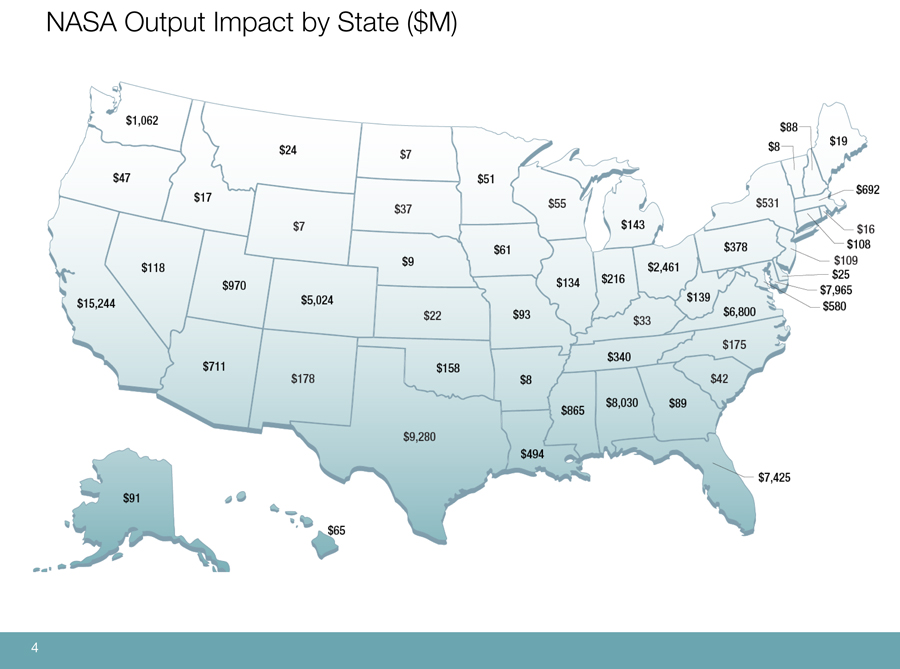 “While our work will always push the limits throughout the cosmos, it also strengthens the planet beneath our feet. NASA partners with small businesses, industry, academia, and other government agencies to address engineering challenges, and to transfer out our technologies, capabilities, and data all for public benefit here on Earth. NASA may be a small federal agency, but we punch above our weight, fueling growth in American industry with good-paying, quality jobs in all 50 states and maintaining our leadership in space and science.” 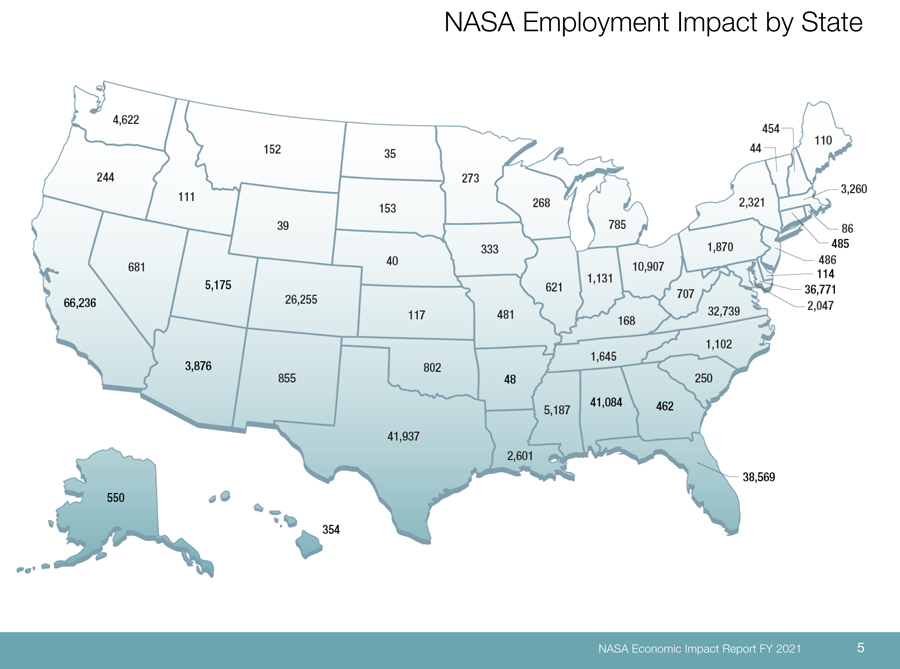 Additional key findings of the study include:
* Every state in the country benefits economically through NASA activities. Forty-six states have an economic impact of more than $10 million. Of those 46 states, nine have an economic impact of $1 billion or more.
* NASA’s agencywide fiscal year 2021 economic output increased by 10.7 percent from fiscal year 2019, the year the agency conducted its first report.* The agency’s Moon to Mars campaign, which includes the Artemis program, generated nearly $2.2 billion in tax revenue, and saw an economic output increase of 42.6% from fiscal year 2019. These activities provided about 28 percent of NASA’s economic impact.
* The agency’s investments in climate change research and technology generated nearly $810 million in tax revenue and provided 11% of NASA’s economic impact.
* NASA has more than 2,655 active domestic and international agreements for various scientific research and technology development activities in fiscal year 2021. The International Space Station is a significant representative of international partnerships – representing 15 nations and five space agencies and has been operating for more than 20 years.
* NASA has 700 different active partnerships with non-federal U.S. partners and partnerships in 44 of 50 states. For example, flight technology like NASA’s all-electric X-57 Maxwell.
* NASA spinoffs, which are public products and processes that are developed with NASA technology, funding, or expertise, provide a benefit to American lives beyond dollars and jobs. The agency has recorded more than 2,000 spinoff technologies since 1976. For example, NASA’s indoor agricultural techniques in vertical farm structures are being adopted by private companies to build indoor farms.
* Scientific research and development, which fuels advancements in science and technology that can help improve daily life on Earth and for humanity, enjoys the largest single-sector impact, accounting for 20 percent of NASA’s overall economic output.