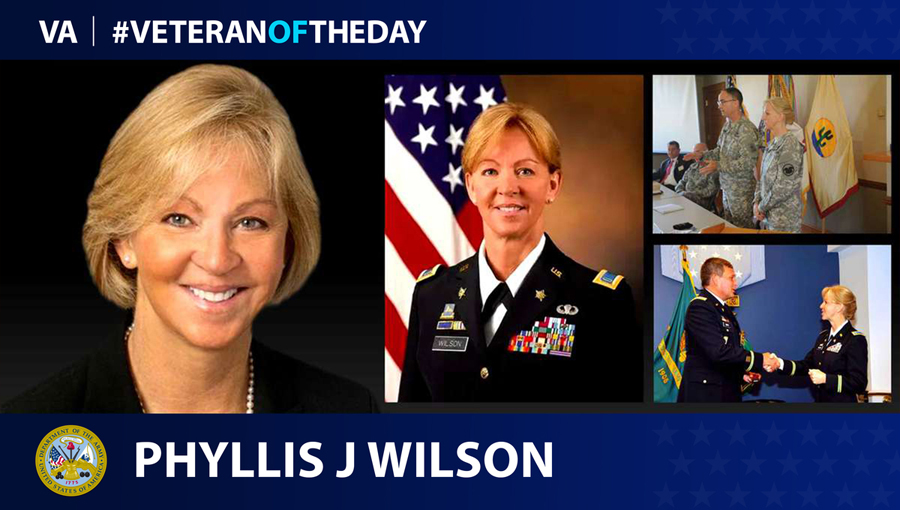 Today’s Veteran Of The Day is Army Veteran Phyllis J. Wilson, who dedicated 37 years to the military as an Army intelligence voice intercept officer.

Wilson did not always plan for a life in the military. As a civilian, she had originally studied to be a physician, but could dropped out because of tuition costs. After stopping at an Army recruitment booth to learn about tuition aid, she fell in love with the idea of a different kind of service. Years later, she now has seven degrees. She’s a registered nurse and holds two master’s degrees — one in management and one in public administration—and two Bachelors of Science, as well as a certificate in Non-Profit Management.

Wilson joined the military in 1981, after completing language training in both Spanish and German at the Defense Language Institute. She continued to study German at the Program of Advanced Security Studies at the George C. Marshall Center and School in Garmisch, Germany, before being assigned to the 3rd Armored Division in Germany as a voice intercept officer. From there, she thrived in the military intelligence division of the Warrant Officer Program for over 30 years. During that time, she traveled to five continents and 35 countries, completing different missions and furthering her training and craft in military intelligence. Some of the highlights of her military career include deployments for Operation Desert Shield and Operation Desert Storm in August 1990, as well as her subsequent mobilization for Operation Enduring Freedom in December 2002. She also deployed twice as an intelligence analyst for Operation Iraqi Freedom.

Later, Wilson was promoted to 5th Command Chief Warrant Officer for the U.S Army Reserve. In this role, she was on the Executive Team, managing more than 200,000 individuals and a budget of $8 billion. There, she demonstrated perseverance in all positions from active deployment to employment in the Pentagon. To honor her service, she was awarded several medals, including a Legion of Merit, a Defense Meritorious Service Medal, a Joint Service Commendation Medal and a Parachutist badge.

Wilson serves as a board member of the Reserve Forces Policy Board, the Policy Vets Allied Forces Foundation, the Army Women’s Foundation, and the Association of the United States Army. However, her more prominent role has been serving as the president of the Military Women’s Memorial. The mission of the memorial is one that “honors and tells the stories of women, past and present, who serve our nation.” ?It’s currently the only historical repository dedicated to documenting all women’s service in the military and their experiences within the Armed Forces. They have sought to honor the more than three million women who have served in the military since the American Revolution. The physical memorial, symbolizing how women have broken through barriers in the military, is located in Arlington, Virginia.

From a life of selfless service in the military to passionate leadership and advocating for all female Veterans, Wilson has shown upstanding dedication.