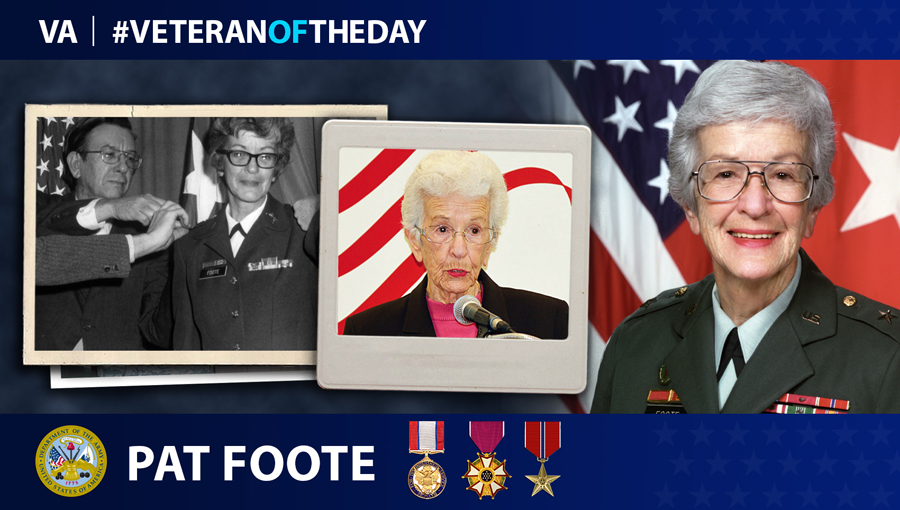 Pat Foote was born in 1930 and took advantage of the changing world around her. She attended Wake Forest University only a few years after it began admitting women. Foote worked her way through school, taking time off to work as a clerk for the Federal Bureau of Investigation to save money for tuition. She graduated in 1953 with a bachelor’s degree in psychology and Spanish.

When she was 29, Foote learned about the Women’s Army Corps. She was commissioned as a first lieutenant in 1959 and began active duty in 1960. After completing basic training, she stayed at Fort McClellan, Ala., for an additional year, training Women’s Army Corps troops. When speaking about this, she said, “I loved training, and I loved to watch them grow and all of a sudden see them begin to click and become a team and watch them making friends that they would have for the rest of their lives.”

Foote’s career would span 29 years. From 1964 to 1966, she worked with recruits and commanded the Women’s Army Corps at Fort Belvoir, Va. In 1966, she went to Vietnam as part of the Adjutant General’s Corps where she was promoted to major and worked in public relations as the first and only woman in the office. After returning from Vietnam, she worked for the director of the Women’s Army Corps branch to prepare the Army for the increased number of women joining. In 1977, she became the first woman to be a faculty member in the U.S. Army War School. She also trained as a military police officer and later went on to command the 42nd Military Police Brigade from 1983 to 1985, leading both men and women — an opportunity that was not accessible to women when she first joined the military. As a leading woman in the Army, Foote had the distinction of being the first woman to be a brigade commander in Europe and the first woman in the Army to be an inspector general.

In 1986, Foote was promoted to brigadier general. Two years later, she took command of Fort Belvoir. Her position embodied her growth in the Army as well as the increased opportunities for women that her service laid the foundation for. When discussing this, she mentioned that she had been at Fort Belvoir before as the “commander of the only company a woman could command.”

Twenty-two years later, she returned to command the whole base.

Throughout her career, Foote was dedicated to recruiting women to the service and advancing opportunities for them. She retired from active duty in 1989 but later served as the vice chair of the Secretary of the Army’s Senior Review Panel on Sexual Harassment in 1996, after being recalled to active duty. In this position, she worked with a team to conduct research and provide recommendations to address the growing issue.

After active duty, Foote was on the board for the Women’s Memorial and worked on logistics and planning for the World War II Memorial. She also served as the president of the Alliance for National Defense, which worked as a “nonprofit group to represent the armed forces women as an educated voice on issues impacting women in the military.” She stayed in this position from 1998 until 2007.

Foote has spent her life serving as a leader for servicewomen, reminding the world that “women aren’t trying to emulate men; they’re a complement to the men and no one is trying to take their place. They simply are trying to have their own place.”
We honor her service.