Korea was a hard place to be in winter, especially during war and over a holiday, and Army Sgt. 1st Class Junior Dean Edwards knew that. His quick thinking and courage in early 1951 were the linchpin to his platoon holding a critical position during battle. Edwards sacrificed his life for the cause, and his valor earned him the Medal of Honor.

Edwards was born Oct. 7, 1926, in Indianola, Iowa, to Walter and Anna Edwards. He was part of a big family that included four brothers and four sisters.

Edwards attended school but dropped out in the ninth grade to work, according to a 1951 article in the Des Moines Tribune. He was drafted into the Army in 1945, shortly after his 18th birthday. Edwards worked as a cook and was being trained as an infantryman when World War II ended. He was discharged in August 1946, but his family said he didn’t have a lot to do when he returned home, so he reenlisted in June 1947.

“He was always laughing and joking,” his sister, A.K. Moldenhauer, said in the 1951 Des Moines Tribune article. “I think he got a kick out of the Army. He wrote us a lot and always seemed to see the funny side of things.”

By August 1950, Edwards was sent to Korea, where he served as a noncommissioned officer with Company E of the 2nd Battalion, 23rd Infantry Regiment, 2nd Infantry Division.

On Jan. 2, 1951, Edwards and his company were working near Changbong-ni to wipe out an enemy roadblock that had stopped the flow of supplies to South Korean troops. Edwards’ platoon had been defending a strategic hill when they were attacked by an enemy machine gun nest set up on adjacent high ground and forced from their position. 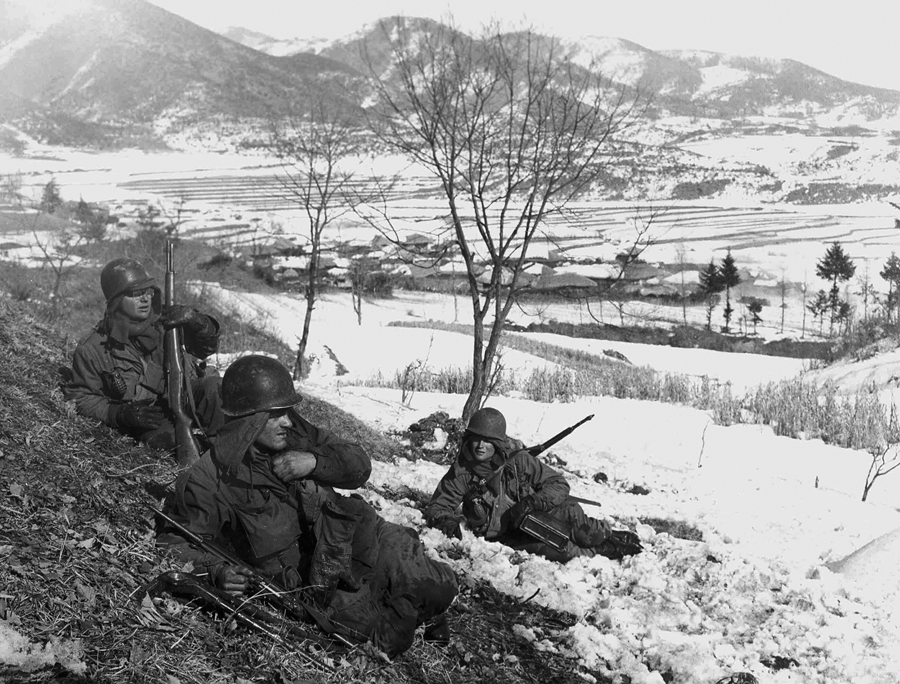 “As the fire of the enemy still covered the area, some of the men were reluctant to move forward,” Maj. Perry A. Sager, Company E’s commander, said in his account of the battle. “Edwards personally led four of the men to foxholes that were within 50 yards of the enemy position. During these trips he was fully exposed to the enemy.”

Edwards then directed fire on the enemy; however, he quickly realized that it wouldn’t do much since the enemy was hidden in a hole. He also knew he couldn’t use mortar fire against them because of their proximity to friendly troops, so Edwards grabbed several grenades and single-handedly charged the hostile nest.

The enemy withdrew but quickly returned when Edwards ran out of grenades. Edwards ran back to replenish his supply, then charged forward again. This time, he managed to land a grenade inside the hole the enemy was in, destroying its weapon and killing its crew.

However, Edwards was forced back yet again when he ran out of grenades a second time. He ran back for more as the enemy replaced its destroyed machine gun with another and resumed fire. When Edwards had collected more grenades, he rushed the hostile emplacement a third time through a vicious hail of fire and again managed to take out the crew and its gun.

Unfortunately, the 24-year-old was seriously wounded during that run and died. However, his courageous sacrifice gave his platoon-mates time to regain their strength and take their position back. They wiped out the roadblock, which allowed the South Korean troops who had been cut off to withdraw with a minimum loss of men and equipment.

When Edwards’ remains were returned to the U.S., he was buried in the Independent Order of Odd Fellows Cemetery in his hometown.

For giving his life in battle, the young sergeant received the Medal of Honor. His father accepted it from Defense Secretary Robert A. Lovett at a Pentagon ceremony on Jan. 16, 1952. Edwards’ mother, a sister and two brothers were also in attendance.

Edwards Hall at the former Fort Des Moines in Iowa and the former Camp Edwards near Kumchon, Korea, were named in his honor.