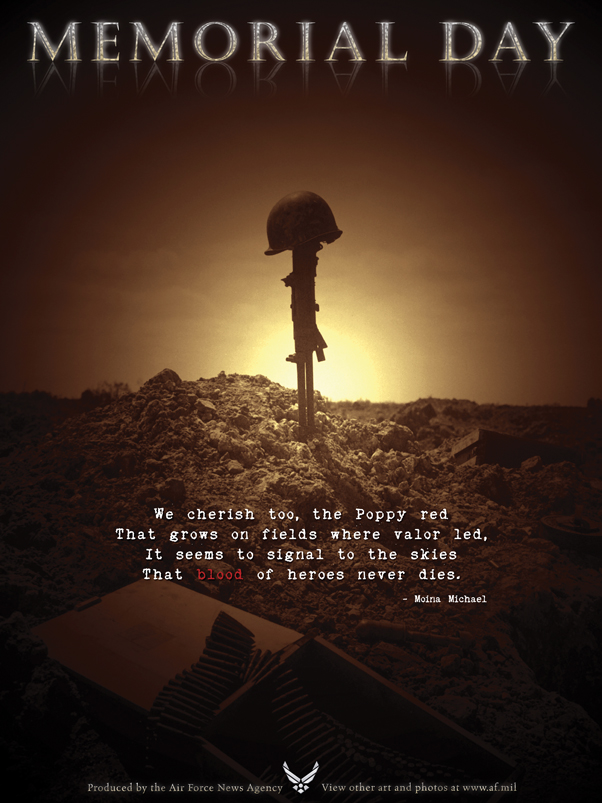 As Americans get ready to observe Memorial Day with travel, family get-togethers and celebrations, let us not forget—it’s not about the BBQ.

Memorial Day is observed specifically to remember those who gave the ultimate sacrifice in service to the United States of America, and to observe a moment of silence is the law.

What’s in a name?

Decoration Day, the original name for the late May holiday, was created to honor the deceased. Soldiers decorated graves of their fallen comrades with flowers, flags and wreaths. In the 1880s, the official title changed but it wasn’t until 1967 that it officially became Memorial Day.

When the Civil War ended, General John Logan, commander of the Grand Army of the Republic, asked for a holiday to commemorate fallen soldiers to be observed each May 30. When the Uniform Monday Holiday Act took effect in 1971, Memorial Day was moved to the last Monday of May to ensure long weekends. However, some veterans’ groups, like the American Legion, have been fighting to restore the original date to set the day apart and pay proper tribute to the servicemen and women who sacrificed their lives defending the nation.

Although not common knowledge, In December 2000, Congress passed a law requiring Americans to pause at 3 p.m. local time on Memorial Day to remember and honor the fallen.

Of course then it was still called Decoration Day, and at the time, Garfield was a Civil War General and Republican Congressman, not yet a President. On May 30, 1868, he addressed the several thousand people gathered at Arlington National Cemetery. “If silence is ever golden,” Garfield said, “it must be beside the graves of 15,000 men, whose lives were more significant than speech, and whose death was a poem the music of which can never be sung.”

More than one Memorial Day?

In addition to the national holiday, nine states officially set aside a day to honor those who died fighting for the Confederacy in the Civil War: Texas, South Carolina, North Carolina, Alabama, Virginia, Louisiana, Mississippi, Tennessee and Georgia. The days vary, but only Virginia observes Confederate Memorial Day on the last Monday of May, in accordance with the federal observance of Memorial Day.

A New York state of mind

According to the N.Y. town’s website, in 1966 Congress unanimously passed a resolution to officially recognize Waterloo as the birthplace of the holiday. However, it remains a contentious debate, with other towns, like Boalsburg, Penn., claiming the title of “Birthplace of Memorial Day” as well.

According to AAA travel, more than 37.2 million Americans will travel over the Memorial Day holiday weekend, the most in a decade, and 4.7 percent more than last year.

So, remember to follow the law and stop wherever you are and whatever you are doing at 3 p.m. on Monday, May 25, to remember those who gave it all for our freedoms.