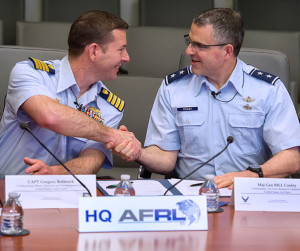 While the memorandum of understanding specifically authorizes cooperation in research dealing with unmanned systems and modeling and simulations, along with other research focus areas, it is broad enough to include any other area of mutual interest.

“We get the opportunity to collaborate with a world-class, military lab that shares a lot of common interest areas with us and it helps both of our services explore and adopt technology, hopefully, faster,” Rothrock said.

“The Coast Guard has access to resources that we don’t have and, through the collaboration, we will be able to access those resources – like different test platforms,” Collins said.

As he prepared to sign the memorandum, Maj. Gen. William Cooley, AFRL commander, said it is important, and in the interest of national security, for the Air Force and Coast Guard to work together. He expressed satisfaction that there are already projects in the works.

“I am glad we could cement this partnership and get productive research and capability deployed for national security,” Cooley said.

“It has just been so heartening to be able to work with another service that is so open to collaboration,” Rothrock said. “I just think working together we can do so much more for each of our services than we can working separately.”