WASHINGTON (AFNS) — Current and former service members, members of Congress, Vietnam veterans and Air Force senior leaders gathered in the Emancipation Hall of the U.S. Capitol in Washington July 8 for a Congressional Commemoration to honor those who served during the Vietnam War.

The ceremony was part of the 50th Vietnam War Commemorative Partner Program, which is a multiyear campaign to thank and honor the veterans of the Vietnam War for their sacrifice and service and to pay tribute to the contributions of their families. Two Air Force veterans were among the 10 recognized in honor of their friends and comrades of war.

“It was a privilege to be present for the pinning of the 50th Anniversary of the Vietnam War lapel pin on Colonel William Driggers Jr. and Colonel Michael Brazelton in honor of all of those who served during Vietnam,” said Air Force Vice Chief of Staff Gen. Larry O. Spencer. “Like many great Americans who served during Vietnam, you will find it was not about them, it was about service to their country and their friends who didn’t make it back. I was proud to help recognize these heroes.”

Driggers served 26 years in the Air Force, earning the Legion of Merit, Distinguished Flying Cross, Meritorious Service Medal, Air Medal, Vietnam Campaign Medal, as well as three bronze stars, and many other awards and medals. He completed 337 combat missions in Southwest Asia and 714 combat hours in the F-4 Phantom II as an aircraft commander.

During this 50th anniversary event, Driggers spoke of his comrades who could not be in attendance for this occasion.

“As I thought about this 50th anniversary event, I wrote down 43 names of my friends and comrades, who didn’t make it home,” Driggers said. “This is a time for me to honor those men, their memories and accomplishments.”

Standing by Driggers’ side was Brazelton. 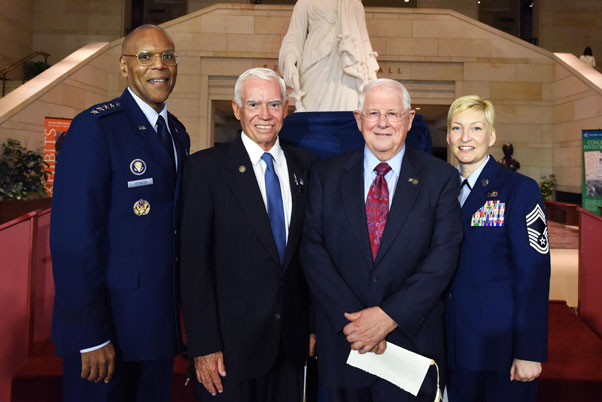 Brazelton was one of the most decorated pilots of the Vietnam War. He volunteered for duty in Southwest Asia to gain more flight experience and return home with enough hours to apply for test pilot school. On Aug. 7, 1966, Brazelton was shot down in his F-105 Thunderchief and was captured by the North Vietnamese and become a prisoner of war.

According to Brazelton, Vietnam veterans should be proud and honored to be received in such a way as this ceremony.

“I have had a number of medals pinned on me in my day and this is certainly the highest ranking and the most honors I have received for any pinning ceremony,” Brazelton said. “Even though it might just be a lapel pin to a lot of people, this is like a medal to the Vietnam veterans.”

Brazelton wants to ensure America remembers and never forgets the sacrifices of these American heroes.

“Remember the Vietnam veterans, especially those who are still suffering from their wounds even after 50 years.”