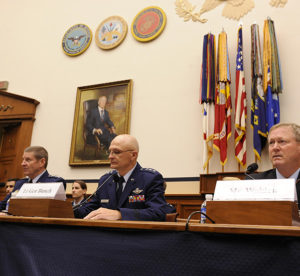 Military experts in Air Force long-range strike capabilities testified Sept. 29 before a House Armed Services subcommittee on the Air Force bomber force structure.
Gen. Robin Rand, the commander of Air Force Global Strike Command; Lt. Gen. Arnie Bunch, the military deputy for the office of the assistant secretary of the Air Force for acquisition; and Randy Walden, the director of the Air Force Rapid Capabilities Office, all responded to questions from the Seapower and Projection Forces subcommittee on the Air Force’s efforts to award a long-range strike bomber.
“This is a case, sir, where we need to go slow to go fast,” Bunch told lawmakers. “We’ve got a fair, deliberate, disciplined and impartial process anytime we do a competition. And we’ve been transparent and working with industry to get this done and documented so we can make that decision. It’s coming soon.”
All three leaders agreed combat commanders and the nation need a new long-range strike bomber in the bomber fleet.
“A key to our success will be our ability to modernize, sustain and recapitalize our bomber forces,” said Rand, who’s responsible for all U.S. intercontinental ballistic missile and bomber forces. “However, modernization and sustainment can only take us so far, so we look forward. And with the LRS-B, that future looks promising. The LRS-B will extend American air dominance against next generation capabilities in an anti-access environment by its long-range, significant payload and survivability.”
When it comes to affordability of the new bomber, Bunch said they aren’t just focused on developing and procuring the LRS-B, but they are focused on the entire lifecycle cost of the platform.
“It is not enough to simply acquire them, we must also be able to afford to operate and sustain them,” Bunch said. “The steps we have taken to build in margin, and open systems up front, will allow us to address the evolving threat and embrace technological advancements. The long-range strike bomber is crucial to our ability to execute the national military strategy in the future and ensure national command authorities have viable military options in the face of a technologically advanced adversary.”
With less than 160 Air Force bombers, the newest of the three bombers is more than two decades old.
“The Long-Range Strike Bomber program will be built as a capability for today, with an eye on tomorrow, both from a threat and evolving technology perspective,” said Walden, whose office handles LRS-B development, upgrades to Washington D.C.’s Integrated Air Defense System, and experimental operations of the X-37 Orbital Test Vehicle.
“The open missions system that General Bunch brought up not only introduces evolving capability with greater ease and lower integration costs; it serves as the catalyst for greater competition throughout the life of the LRS-B program,” Walden continued. “This, in turn, presents a greater value for our Air Force and our nation.”
When asked about the impact that would occur if the Air Force wasn’t able to acquire a new bomber, the trio agreed the new LRS-B is crucial to the branch’s ability to execute national military strategy.
“The purpose of the long-range strike with a bomber is to be able to hold any target in the planet at risk, not within weeks or months, but in hours,” Rand said. “That’s the beauty of what the long-range bomber can do. Long-range strike gives combatant commanders and our senior leaders in this nation great flexibility to make sure that we are able to deter adversaries and assure our partner nations.”