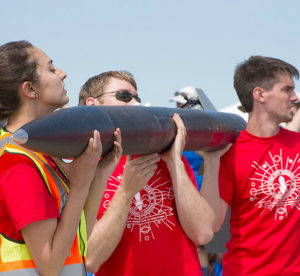 NASA photograph by Emmett Given

Members of the University of Louisville Rocketry Team — River City Rocketry — carry their rocket to the launch pad during the 2015 Student Launch challenge near NASA’s Marshall Space Flight Center.

NASA selected 55 student teams from across the nation to participate in the 2015-2016 NASA Student Launch challenge, to be held April 13-17 near NASA’s Marshall Space Flight Center in Huntsville, Ala.
Student Launch is a research-based, experiential exploration activity, requiring an eight-month commitment to design, construct, test, launch and successfully recover a reusable rocket and its scientific or engineering payload. Teams were chosen based on a comprehensive review of their proposal, which outlines their vehicle, its recovery system, payload, safety and educational engagement plans. A complete list of the 2016 Student Launch teams can be found at http://go.nasa.gov/1FRGoq5.
“Student Launch provides a real-world opportunity for our next generation of engineers and scientists to succeed in aeronautics and aerospace,” said Tammy Rowan, manager of Marshall’s Academic Affairs Office. “A true hands-on activity, Student Launch pushes their limits in critical thinking, improves their science, technology, engineering and math skill-sets and better prepares them for success in tomorrow’s workplace.”
Throughout the process, students will engage in the same tasks and processes currently used by NASA, including a lengthy series of technical reviews mirroring current criteria in NASA’s engineering design lifecycle and safety protocols. In addition, student designs must align with current NASA projects, such as the Space Launch System and Mars Ascent Vehicle.
“We are proud to be involved for a second year with Student Launch, helping students succeed in meaningful NASA opportunities,” said Centennial Challenges Program Manager Monsi Roman. “MAV and Student Launch align with current NASA research, addressing potential technical issues we may face on our journey to Mars.”
The MAV challenge requires teams to develop an autonomous system to insert a sample container into their rocket, launch and safely recover both the sample and the rocket. Such innovative technology could be considered for future Mars exploration missions. The Centennial Challenges Office will award up to $50,000 in prize money to the top three teams able to successfully complete this challenge.
Student Launch is managed by Marshall’s Academic Affairs Office with funding and leadership provided by NASA’s Office of Education, NASA’s Human Exploration and Operations Mission Directorate and Orbital ATK’s Propulsion Systems Division of Promontory, Utah. The Centennial Challenges program is managed at Marshall and is supported by the Space Technology Mission Directorate.
To learn more about NASA’s Student Launch challenge, visit http://www.nasa.gov/education/studentlaunch.  For more information about the Centennial Challenges MAV Challenge, visit http://go.nasa.gov/1LbC8O6.