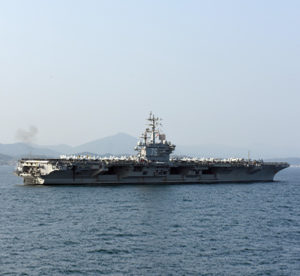 Sailors aboard the U.S. Navy’s only forward-deployed aircraft carrier USS Ronald Reagan (CVN 76), man the rails while participating in the Republic of Korea Navy’s Fleet Review. The fleet review celebrated the 70th anniversary of the ROK Navy and served as a symbol of the enduring U.S. and ROK alliance.

BUSAN, Republic of Korea–The Ronald Reagan Carrier Strike Group (CSG) is scheduled to conduct a series of exercises with the Republic of Korea Navy Oct. 26-29, to strengthen maritime interoperability, tactics, techniques and procedures.
The U.S. routinely conducts CSG operations in the waters around the Republic of Korea to exercise maritime maneuvers, strengthen the U.S.-ROK alliance and improve regional security.
“The U.S. and the Republic of Korea share one of the strongest alliances in the world,” said Rear Adm. John Alexander, commander, Battle Force 7th Fleet. “Our navies learn from each other, and we grow stronger as an alliance because of our routine exercises here in South Korea, and the close relationship and ties that we forge from operating at-sea together.”
The exercises will consist of a routine bilateral training, subject matter expert exchanges, anti-submarine and anti-surface warfare drills, communication drills, air defense exercises, counter-mine planning and distinguished visitor embarkations.
The U.S. Navy maintains a presence in the Indo-Pacific region to help preserve peace and security and further our partnerships with friends and allies. Our forward presence contributes to freedom of navigation and lawful use of the sea, and also furthers operational training and enables an exchange of culture, skills and tactical knowledge.