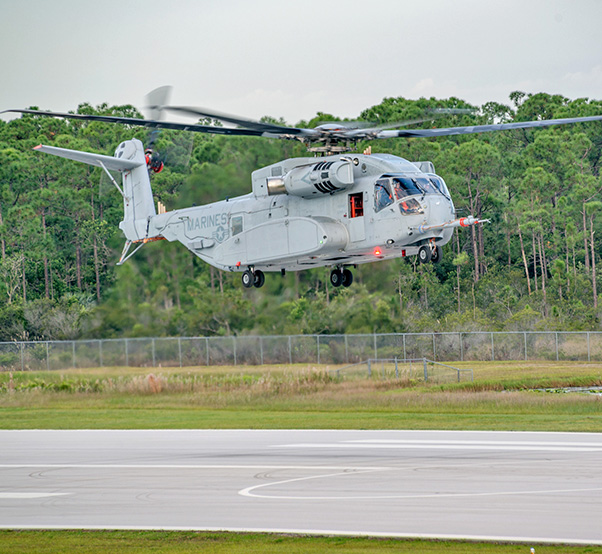 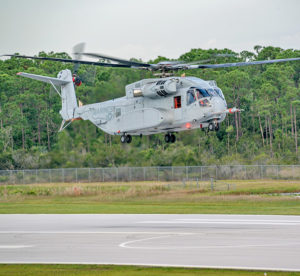 Sikorsky Aircraft Corp., a subsidiary of United Technologies Corp., announced Oct. 27 the successful first flight of the U.S. Marine Corps’ CH-53K King Stallion heavy lift helicopter protoype, known as Engineering Development Model-1.
The 30-minute flight signals the beginning of a 2,000-hour flight test program using four test aircraft.
“EDM-1’s first flight signifies another major milestone for the CH-53K helicopter program,” said Mike Torok, Sikorsky’s CH-53K program vice president. “Having independently tested the aircraft’s many components and subsystems, including integrated system level testing on the Ground Test Vehicle, we are now moving on to begin full aircraft system qualification via the flight test program.”
Sikorsky delivered the EDM-1 into the test program at the company’s West Palm Beach, Fla.,-based Development Flight Center in late 2014. During its 30 minute maiden flight the EDM-1 aircraft performed hover, sideward, rearward and forward flight  control inputs while in ground effect hover up to 30  feet above the ground.  As the flight test program proceeds, the EDM-1 will be joined by an additional 3 EDM aircraft to fully expand the King Stallion’s flight envelope over the course of the three-year flight test program.
“We have entered a much anticipated phase in this developmental program,” said Col. Hank Vanderborght, U.S. Marine Corps program manager for Heavy Lift Helicopters. “We have experienced significant learning at the system and sub-system levels, which continues to build our confidence in the capabilities of the 53K.  With first flight behind us, we look forward to execution of the development and operational testing and the deployment of this incredible heavy lift capability to our warfighters.” 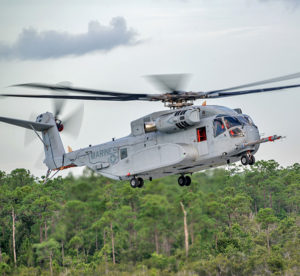 Sikorsky, with support of others in the industry, is developing the CH-53K King Stallion heavy lift helicopter for the U.S. Marine Corps. The CH-53K King Stallion helicopter will maintain similar physical dimensions as its  predecessor, the three-engine CH-53E SUPER STALLION™ helicopter, but will nearly triple the payload to 27,000 pounds over 110 nautical miles under “high hot” ambient conditions. Features of the CH-53K helicopter include a modern glass cockpit; fly-by-wire flight controls; fourth-generation rotor blades with anhedral tips; a low-maintenance elastomeric rotor head; upgraded engines; a locking, United States Air Force pallet compatible cargo rail system; external cargo handling improvements; survivability enhancements; and improved reliability, maintainability and supportability.
The U.S. Department of Defense’s Program of Record remains at 200 CH-53K aircraft with a Initial Operational Capability in 2019. Eventual production quantities would be determined year-by-year over the life of the program based on funding allocations set by Congress and the U.S. Department of Defense acquisition priorities. The Marine Corps intends to stand up eight active duty squadrons, one training squadron, and one reserve squadron to support operational requirements.