Commemorating the 60th Anniversary of the first flight of the U-2 and the 25th anniversary of the SR-71 Smithsonian Speed Run, legendary SR-71 and U-2 pilots shared a few of their experiences during the 27th Annual Gathering of Eagles at the Hunter Pavilion, Lancaster, Calif.
Hosted by the Flight Test Historical Foundation and Chairwoman Lisa Gray, the annual gala raises funds to support moving the museum to a new location outside of the restricted area of Edwards AFB.
“You certainly won’t read about some of these experiences in the history books,” said Joe Sobczak, former F-16 test pilot.
Eagle Honorees for 2015 include:

Members of the panel represented the complete life span of the U-2 program — one of the most unique and longest lasting Intelligence, Surveillance and Reconnaissance platforms in the history of US aviation.
Ed Yeilding said he will never forget the beauty of his last flight with Reconnaissance Systems Operator, J.T. Vida, when they delivered a SR-71 Blackbird, March 6, 1990, to the Smithsonian and broke four speed records.

After refueling over the Pacific Ocean and hitting the after burners 200 miles out, the historic mission was on course. “In the twilight, the sun was just coming up across the west coast, it was just bright enough to see the white foam ocean breakers all along the California coastline- it was beautiful, and yet, it was still dark enough to see the millions of lights of Los Angeles below us,” shared Yeilding. To his left he could see the lights of San Francisco, to his right, the lights of San Diego and the darkness over Mexico and beyond. Moments later, Palmdale heard their sonic boom.
Traveling one mile per 1.7 seconds, Yeilding said it didn’t take long to see the Grand Canyon and the majestic Colorado mountains. Passing 60 miles south of Pike’s Peak, he saw the same fruited planes that inspired Katharine Bates to write one of his favorite hymns, “America the Beautiful.”
“I thought of the thousands of farmers that worked hard to feed our country and the brave pioneers that just 150 years earlier, would have taken months to cross.” He wondered what transportation would be like in another 150 years. Enjoying the darkness above them and the curvature of the earth surrounded by a layer of blue, Yeilding and Vida took it all in. “JT and I made sure we enjoyed one last view of God’s creation.”
Feeling fortunate to serve with hundreds of other people who were dedicated to building, maintaining and flying the SR-71, Yeilding was sad that despite spending millions of dollars upgrading the aircraft, Congress voted in 1989 to retire the SR-71 Blackbird fleet. “From sea to shining sea, the flight took 67 minutes and 54 seconds.”
After seeing the Blackbird with afterburners lit on the front page of the Washington Post the next day, the record setting gentlemen enjoyed their moment of fame. They were upgraded to first class on a commercial flight back to California, “but it took five and a half hours!” laughed Yeilding.
Sharing the early days of the secret CIA U-2 program, Louis Setter participated in early flight test under the legendary C. Kelly Johnson, who invented over 40 aircraft. “Kelly was an absolute dictator and that is exactly the way it should have been. He made every decision.” If Kelly wanted something done, it happened, nobody questioned him, explained Setter. 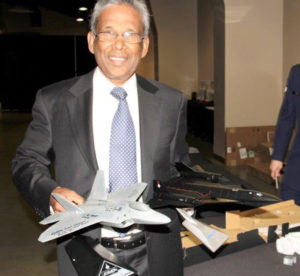 Happy winner — Dr. Sinn Moorthy was the highest bidder for the F-22 Raptor model and a 1:72 scale custom diecast model of the SR-71 which was flown by Ed Yeilding and RSO, JT Vida, on the last Smithsonian flight in 1990. Astonished by the historic memorabilia available to the public, Moorthy is a great supporter of the Flight Test Museum and hopes more civilians will get involved and support the Historical Foundation.

U-2 pilots weren’t allowed to walk around the aircraft for a pre-check because the flights were so exhausting, every ounce of energy had to be saved. Pilots would often loose six to eight pounds per mission due to dehydration. Setter said there were no flying rules back in the early days.
“The FAA didn’t give a damn what we did as long as it was above 60 thousand feet and we were always above 60 thousand feet.”
Flying over the Soviet Union and classified locations, he said CIA pilots were the bravest he has ever known, collecting the best data SAC had ever seen. America denied flying over the Soviet Union, but when Francis Gary Powers was shot down, a pilot that Sutter trained, America had to fess up.
One member of the panel, Tony Bevacqua, was the only pilot in the room to have flown both aircraft. Bevacqua was asked if he would go on a classified mission. He said yes, even though he had no idea what he would be doing. Soon he was fitted for a pressure suit and was flown to a remote base where he saw a U-2 for the first time.
Current U-2 Pilot Rob “Skid” Row and Melani Austin, Lockheed Martin U-2 program director, briefed the audience on the aircraft’s current capabilities and the fact that, despite being 60 years old, the Dragon Lady is capable to fly well into 2045.
Dave Kerzie, who was the 1986 recipient of the Iven C. Kinchloe Award as the industry’s Test Pilot of the Year for his work in performing extremely high-altitude flutter investigations, thought for a moment that he once thought a red glow was a bomb blast. Fortunately, it was the moon rising. “It was one of the most beautiful things I’ve ever seen,” said Kerzie. After viewing the stars (at a classified altitude) he realized just how small he was in the scheme of life. “I’m not a tree hugger,” he claims, but after witnessing a total undercast created by contrails of commercial aircraft far below him, he wondered how much man was affecting the environment.
“This is the reason I come to these gatherings,” added Joe Sobczak, current Flight Test Captain at United Airlines, who along with Research Test Pilot and Director, Safety and Mission Assurance at NASA Armstrong, Dana Purifoy, (also a former U-2 Test Pilot) shared emcee duties throughout the evening. Pilots shared some details of missions that were only recently deemed unclassified. 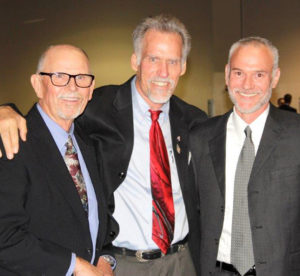 Historical Foundation Trustee Jens Neelsen presented a certificate of appreciation to Dr. Keith Jamieson for a pledge of $50 thousand from the Glen and Lois Jamieson Family Fund to the Foundation’s Capital Campaign. This pledge allowed the FTHF to qualify for a $300,000 matching grant from the Conrad N. Hilton Foundation. “I am very pleased to announce we have now raised enough money to break ground outside the gates of Edwards AFB,” said Chairwoman Lisa Gray. “We have initiated the offer of gift to the United States Air Force, the first tangible step toward building the new museum!”
Appreciating the stratospheric environment the pilots endured, Art Thompson of Sage Cheshire (builder of the Red Bull Stratos capsule) and FTHF Board 1st Vice Chairman, designed and built the unique water jet and metal break centerpieces that were auctioned amongst guests at each table.
The Foundation also has an ancillary mission to encourage STEM education. To that end, they award two scholarships per year in amount of $2,000 to a student studying in the engineering field. The 2015 recipient of the C. Gordon Fullerton Memorial Scholarship was Joseph Lopez, a senior in Mechanical Engineering at CSU Long Beach, enrolled in the university’s Antelope Valley Engineering Program.