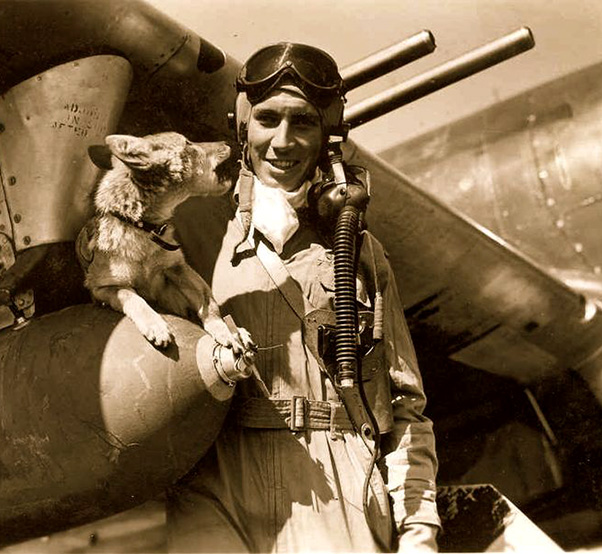 Thinking about Veterans Day coming up on Nov. 11, I would like to step away from the local aviation history and just share the story of a couple of World War II veteran aviators that have a very unique story.
I hope you enjoy this and that it will bring a smile to your face, and by all means don’t try this nowadays or your neighbors and commanding officers will not look kindly on you!
Bill Crump flew more than 25,000 hours in his life but none where quite like his time In Europe as a P-47 Fighter Pilot. 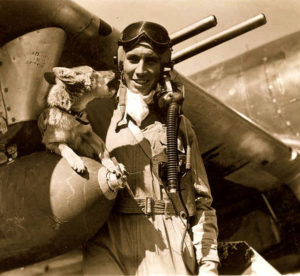 Part of the 356th Fighter Squadron in England his story started with a close friend when he was in gunnery training out in the desert when a local farmer flagged him down coming back one day wondering if Bill could use the 50 cals to thin out the local Coyote population that was visiting his chicken coops at night! Bill said that was out of the question but he asked about the chance of finding a Coyote pup for he always wanted to see if he could domesticate one . The farmer took him to a den and, in short order, he picked out a funny looking bowlegged pup and set about his project much to the displeasure of the others in his outfit.
Bill worked with the pup and before long Jeep, as he called him, became a strange lap dog in a military man’s world.
Training over, orders came and Bill was being sent to England with the other pilots on the Queen Elizabeth. Jeep was not going to be left behind so with a little GI ingenuity a gas mask bag with holes cut in it became a hiding place for the little Coyote pup! Once on ship it did not take long for the word to get around that a Coyote was on board and it worked out good for Bill and his other bunkmates as every girl on the ship wanted to come by and see Jeep!
One day while he was sleeping he heard a noise and popped up to see the tallest, meanest-looking bird colonel he’d ever seen in his life. He was Army not Air Corps and had worked on two tours of combat. When he came in everybody popped to stiff attention. He walked down the line. He knew I had the Coyote, so I stepped forward. He said “Let me see the damn thing.”
I reached down and grabbed the chain and pulled Jeep up and sat him in my arms and went back to attention. I noticed he wouldn’t approached me to pet it our touch it, Finally he said “Well I’ll be damned” Then he told a story about how when he was a kid he tried to train a coyote but it never worked out and he had to let it go. After that he disappeared as fast as he had arrived. The rest of the trip went on without a hitch and Bill and Jeep’s arrived ready for combat.
When we arrived at our base I was told that when the English got him they would kill him because they would put him in quarantine for a year. I went to a squadron that was off the base. There we lived in temporary quarters until we could move into this castle and I could keep Jeep out of sight. The coyote slept with me and it was damn cold in England. With only two blankets you would shiver most of the night. Some nights it was a two coyote night! 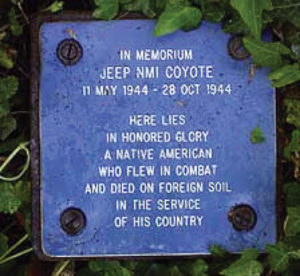 Now the amazing part of this story is that if it was a low altitude mission when we started flying combat I would take Jeep along. He ended up flying five combat missions with me. One of those missions will always stand out for Jeep saved my life.
We were up about 5,000 feet on a mission to Arnhem, Germany, when he just lurched real fast. I didn’t know what was going on, but I looked in the rear view mirror and saw two bursts of flak trailing me. Then I saw a third burst coming up my tail, I broke hard left and luckily it missed. The burst went off right where I would have been if I had not broke away. That night Jeep ate very well.
Sad to say Jeep’s life in the war zone only lasted about a year for one day after a mission Bill came back and Jeep] was nowhere to be found.
After a nightlong search they found him. He had been hit by a car. Bill was on his bike so he put him in his jacket and pedaled back to the base, Bill was devastated.
When he got back to the base the commander said Crump, you and I are going to the bar. Then he turned to the others and said build him a casket.
Not long after a chaplain showed up and the next morning Jeep was laid to rest in English soil with full military honors right down to a 21-gun salute with the Pilots 45’s. His casket covered with flowers from not only the pilots and support crews but from the citizens from the area. Bill when asked if he shed any tears replied, oh, yes That Coyote kept me warm at night, and he saved me. I was closer to that animal than I was to any of my comrades in those days, so it was a very sad affair. Bill went back to England two times to visit his friends’ grave.
People ask where is he buried and Bill shared this. Right there at the castle. It’s called Playford Hall. People will come to see the 800-year old castle and the first thing they’ll ask the owners is where is the coyote buried. He rests under a tree and he has a headstone with his picture on it and the words that the chaplain recited on the day we laid him to rest.
Bless our veterans on this Veterans Day and we will remember the men and women of today and yesterday that served on behalf of we citizens of the United States and we will also remember a citizen of the southwest with four legs who rests in foreign soil that in his own very small way helped to secure the victory in World War II.
The spirit of the American Airman lives on in our history and the men and women who fly today. Till next time Bob out …