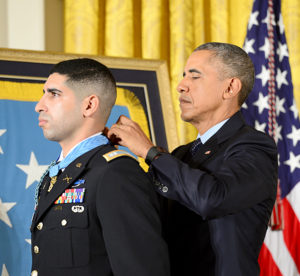 President Barack Obama hosts the Medal of Honor Ceremony for retired U.S. Army Capt. Florent Groberg at the White House in Washington D.C., Nov. 12, 2015. Capt. Groberg received the medal for actions during a combat engagement in Kunar province, Afghanistan, Aug. 8, 2012 while he was the commander of a personal security detail for the 4th Brigade Combat Team, 4th Infantry Division, when he and another soldier, Sgt. Andrew Mahoney, identified and tackled a suicide bomber, saving the lives of the brigade commander and several others.

On Nov. 12, medically-retired Capt. Florent A. Groberg became the 10th living service member to receive the Medal of Honor for selfless actions on the battlefield in Iraq or Afghanistan.
President Barack Obama draped the nation’s highest military award for conspicuous gallantry around the 32-year-old’s neck in the East Room of the White House in front of the Soldiers who were part of the personal security detachment he was leading in Kunar province, Aug. 8, 2012.
Obama told Groberg’s story of how the French-born former Soldier came to America and became a naturalized citizen in 2001, the same year he graduated high school in Maryland. He next attended the University of Maryland competing in track and cross-country before graduating and receiving his commission in the Army in 2008.
“Training, guts, teamwork,” Obama said. “What made Flo a great runner also made him a great Soldier. In the Army, Flo again took his training seriously — hitting the books … paying attention to every detail in field exercises, because he knew that he had to be prepared for any scenario.”
His greatest test of his training happened on his second deployment to Afghanistan where he was hand-picked to head up a security detail. On that day in 2012, he was leading his security detail by foot in a diamond-shape formation tasked with protecting two brigade commanders, two battalion commanders, two sergeants major and an Afghanistan National Army brigade commander.
As the formation approached the provincial governor’s compound, Groberg noticed off to his left a man dressed in dark clothing, walking backward, some 10 feet away. The man spun around and turned toward the captain who simultaneously sprinted toward him and began pushing him backward and farther from his detail. As he pushed him away, Groberg noticed a bomb under the man’s clothing.
“And at that moment, Flo did something extraordinary – he grabbed the bomber by his vest and kept pushing him away,” the president said. “In those few seconds, he had the instincts and the courage to do what was needed. One of Flo’s comrades, Sgt. Andrew Mahoney, had joined in too, and together they shoved the bomber again and again… pushing him so hard he fell to the ground onto his chest… ball bearings, debris, dust exploded everywhere.”
The blast threw Groberg 15 to 20 feet and knocked him unconscious. When he awoke he found himself in the middle of the road in shock, an eardrum blown out and his left leg broken with most of his calf muscle torn away and bleeding badly.
What Groberg didn’t know was at the time the suicide bomber blew up, a second suicide bomber released his bomb killing four others outside the perimeter.
“That blast by the bridge claimed four heroes Flo wants us to remember today,” Obama said. “One of his mentors, a 24-year Army vet who always found time for Flo and any other Soldier who wanted to talk — Command Sgt. Maj. Kevin Griffin; a West Pointer, who loved hockey and became a role model to cadets and troops because he always cared more about other people than himself — Maj. Tom Kennedy; a popular Air Force leader known for smiling with his whole face, someone who always seemed to run into a friend wherever he went – Maj. David Gray; and, finally, a USAID [U.S. Agency for International Development] foreign service officer who had just volunteered for a second tour in Afghanistan, a man who moved to the United States from Egypt and reveled in everything American, whether it was Disneyland or chain restaurants or roadside pie – Ragaei Abdelfatah.
“These four men believed in America… they dedicated their lives to our country… they died serving it,” Obama said.
The president added that Groberg suffered significant nerve damage and has endured more than 33 surgeries to keep his leg.
“He’s not running, but he’s doing a lot of CrossFit — I would not challenge him to CrossFit,” Obama joked. “He’s putting some hurt on some rowing machines and some stair climbers … I think it is fair to say he is fit.
“Today, Flo is medically retired, but like so many of his fellow veterans of our 9/11 generation, Flo continues to serve,” Obama continued. “They are incredibly highly-skilled, dynamic leaders always looking to write that next chapter of service to America. For Flo, that means a civilian job with the Department of Defense to help take care of our troops and keep our military strong.
“And, every day that he is serving, he will be wearing a bracelet on his wrist — as he is today — a bracelet that bears the names of his brothers-in-arms who gave their lives that day,” Obama added. “The truth is, Flo says that day was the worst day of his life. And that is the stark reality behind these Medal of Honor ceremonies – that for all the valor we celebrate, and all the courage that inspires us, these actions were demanded amid some of the most dreadful moments of war.”