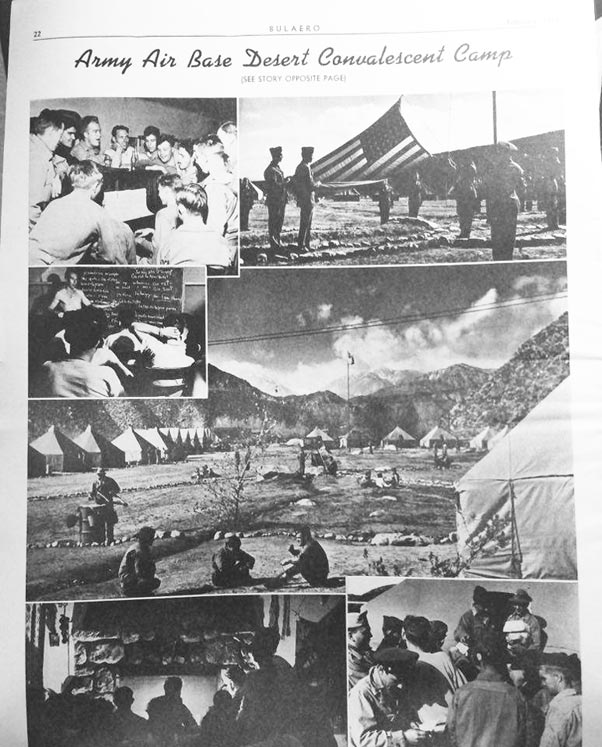 This time of the year we are all being reminded to get that flu shot. If you are in the ranks of Uncle Sam, it’s just a part of your yearly duties.

However, back in World War II the way they handled illness looked a lot different than it does today.

Santa Ana Army Air Base in Santa Ana, Calif., had a problem.

Thousands of aviation hopefuls were passing through the base from all over America and they were bringing more that their hopes and dreams of being pilots, navigators and bombardiers — they were also a good source for passing those nasty cold and flu bugs!

In a target-rich environment of a cold and damp beach community, the chances of a major epidemic wiping out hundreds of American airmen was a real concern.

So the “higher ups” came up with a plan: get the sick off the base and send then somewhere where they had a chance to breathe fresh, dry air and they could recover without infecting their fellow airmen.

Palm Springs was out of the question (you might never see them again!), but the High Desert of the Mojave in the Antelope Valley was a perfect place! So in short order, just a little west of present day Longview Road at the base of Mount Baldy on the way up to Wrightwood, an Army Air Corps tent city showed up to house sickly cadets.

Now it’s to be noted that this was not being treated as a “Dude Ranch” and in an article about the facility, the following operational guidelines were given:

“When a cadet arrives at the camp he is not treated as a patient. He is placed on his squadron’s active duty list which includes many regular Army chores, a modified educational program, and a carefully planned physical training schedule.”

Now the powers that be who promoted this location as being warmer and drier than the cold and damp of Irvine Lake (which was where an earlier incarnation of this camp was first established) must have never been to that area of the Antelope Valley in the winter!

The two week stays started in June of 1943 and the special convalescent program lasted for about two years off and on as cold and flu outbreaks in Santa Ana continued.

An article reporting on this operation summed it up like this:

“So while the building of sound physical specimens of America’s future airmen is the key note of the Army Air Forces, those with the misfortune of temporary “conking out” still are given every opportunity to make a comeback. Site of such comeback grounds for Santa Ana Army Air Base is this dude ranch out on the Mojave in the High Desert — not for dudes but for recuperating aviation cadets!”

So there you have it, another forgotten place and story about our home here in the Antelope Valley. I wonder how many of those cadets that came to our “health spa” in the foothills of south Antelope Valley went on to great things in the skies of Europe and the Pacific and I wonder if they ever spoke of the dude ranch where horses and cowpokes were replaced with the pinks and greens of sickly airmen.

Till next time, stay healthy and have a great Thanksgiving! Bob out …