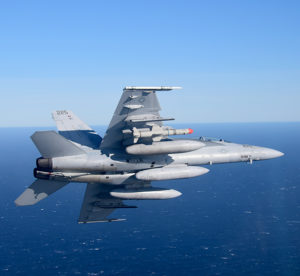 An F/A-18 carries the new Harpoon Block II+ missile during a free flight test Nov. 18 at Point Mugu’s Sea Range in California. The Navy plans to deliver the Block II+ variant to the fleet in 2017.

The U.S. Navy completed a free-flight test of the new network-enabled Harpoon missile system Nov. 18 at the Sea Range at Point Mugu, Calif.
Building on the nearly 40-year legacy of the Harpoon, the upgraded missile, known as Block II+, will have the ability to receive in-flight updates that improve the targeting and engagement of moving maritime targets.
“This successful free-flight test is a tremendous achievement for the joint Boeing and Navy team and reflects their hard work and dedication over the past several years,” said Cmdr. Matt Farr, Harpoon/ Standoff Land Attack Missile—Extended Range deputy program manager. “We are on schedule to deliver this important capability to the fleet in 2017, giving the U.S. Navy a significant advantage in anti-surface warfare.”
The free-flight missile event was the first end-to-end functionality test of an inert Harpoon Block II+ from pre-flight to target impact. The test proved that the missile could receive target location updates from an F/A-18 while in-flight through its network-enabled datalink. It then successfully acquired a moving ship target using its active radar seeker and guided itself autonomously to impact the target.
This test, the culmination of 152 lab-test sessions, 15 aircraft ground tests and 16 flight tests, will be followed by another more demanding developmental test in fiscal year 2016.
“The Harpoon missile is the premier surface warfare weapon in service today and we are working to ensure that it remains viable and lethal into the future.” said Capt. Jaime Engdahl, Precision Strike Weapons program manager. “Block II+ is a critical capability for us and we are taking every opportunity to pace the growing maritime threat by continuously improving Harpoon’s range, survivability, and lethality.”
The AGM-84N Harpoon Block II+ will also have a new GPS guidance kit that will enhance the weapon’s navigation.
Harpoon is an all-weather, over-the-horizon weapon designed to execute both land-strike and anti-ship missions against a range of targets.  Since introduction to the fleet in 1977, a total of 7,500 missiles have been delivered to the U.S. Navy and its 29 foreign partners. 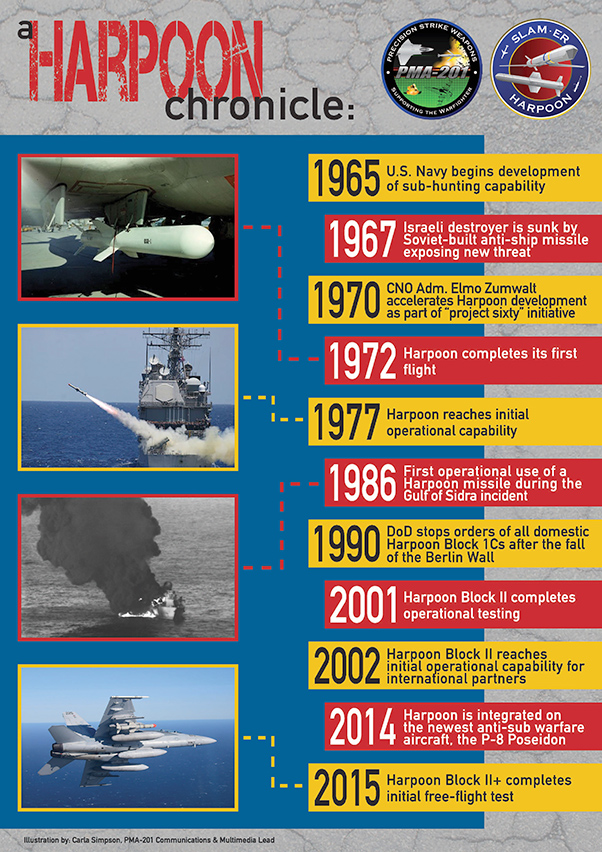