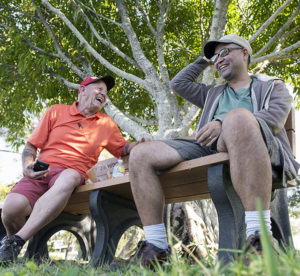 For veterans who may have Post-Traumatic Stress Disorder due to wartime trauma or military sexual trauma, their first step is to contact their local U.S. Department of Veterans Affairs Vet Center or outpatient center.
But if veterans require more care, they can voluntarily check in at inpatient centers such as the Bay Pines VA Medical Center in Bay Pines, Fla.
Bay Pines has a 14-bed residential program for veterans with war-caused PTSD and a separate wing for veterans with PTSD caused by military sexual trauma.
According to the U.S. Department of Veterans Affairs’ PTSD website, military sexual trauma, or MST, is the term used by the VA to refer to experiences of sexual assault or repeated, threatening sexual harassment that a veteran experienced during his or her military service.
The definition for military sexual trauma used by the VA comes from federal law — Title 38 U.S. Code 1720D. Under that law, MST is defined as: “Psychological trauma, which in the judgment of a VA mental health professional, resulted from a physical assault of a sexual nature, battery of a sexual nature, or sexual harassment which occurred while the veteran was serving on active duty, active duty for training, or inactive duty training.”
Sexual harassment is further defined by the law as “repeated, unsolicited verbal or physical contact of a sexual nature which is threatening in character.”
Bay Pines is the only VA inpatient facility that treats PTSD caused by MST, said Tony Taylor, program manager for the warzone PTSD program at Bay Pines.
Taylor, a Marine Corps and Vietnam War veteran who’s worked with the VA for more than 36 years and has PTSD himself, said he’s seen many positive changes in the VA for the treatment of PTSD.

Comprehensive programs for veterans
“I’ve seen tremendous changes,” he said. “We now have comprehensive programs designed to help veterans who suffer from PTSD. It’s a cooperative partnership we’ve established at this hospital where we have teams working together to help the veterans. The primary care doctor does the physical exam. The psychiatrists understand what medications have been proven to be effective for helping veterans with PTSD.
“We have psychologists and social workers who are trained in providing evidence based care for veterans with PTSD which is throughout the entire VA system,” he continued. “You will get the finest care possible through the VA system if you seek care at a VA hospital.”
Taylor said the next step is for veterans to be referred to the voluntary inpatient centers like Bay Pines by local Vet Centers or VA hospitals so there’s a continuity of care, both before the veteran arrives and for follow-up care after the veteran leaves Bay Pines. There are approximately 20 programs like Bay Pines.
Rose Stauffer, a licensed clinical social worker who’s been with the VA for five years and with Bay Pines for six months, said she loves what she does. She’s been in her career field 16 years.

Veterans seeking help
“I started out working with homeless veterans and getting them hooked into services at the VA,” she said. “I was very grateful to get this position at Bay Pines because I love it. This is where my heart is. This program is essential for people who are really getting a grip on the fact they have PTSD, and they’ve tried everything on their own that they’ve can.”
Stauffer added, “We can help bring down the anxiety and provide hope. People do find a way to recover from PTSD in that they can live a life that is meaningful to them, but it’s hard work and it’s a big process. There’s stuff that works and we can help you find it.”
For Rachel Dyson, a pre-doctoral psychology intern who’s worked at Bay Pines for three months, the call to service came from her family.
“I grew up in a family of veterans, so it’s really near and dear to my heart,” Dyson said. Her father, she said, served in the Air Force during Vietnam.
“I’d like to continue a career in PTSD and trauma-focused work and also focus on female veterans,” Dyson added.
She said the therapists work with the other doctors as a team.

Using teamwork to assist veterans
“As a team, we really have a commitment to what we call patient centered care so it’s a wrap-around approach,” Dyson said. “We meet every morning, and we discuss how everybody’s doing on the unit. It’s made up of social workers, psychologists, psychiatrists and primary care doctors, so we really have a wrap-around program of care here, where we’re able to communicate as professionals to provide individuals the best care that we can.
“The other piece of it,” she continued, “is that everything is right here, so they can easily get access to their clinicians, and they can easily get access to resources.”
Dyson said she knows coming into an inpatient residential program could be scary for veterans seeking help.
“This is something people have kind of put off for many years, and it takes an incredible amount of courage to actually come into a program like this and do the work, but I also know that there’s a lot of hope for people who come into our program because we know there’s things here that can really work,” she said. “We know there are treatments here that can really help. Even though it might seem scary, we’ve got people who’ve gone through it and come out the other side and are better for it.”

Veterans’ testimonials
Retired Army SSgt. Manuel “Al” Alcantara, who’d served as a combat medic for more than 21 years, recently graduated from Bay Pines — his second inpatient PTSD program.
Alcantara served three tours in Iraq during Operation Iraqi Freedom and he said his PTSD symptoms started showing up after his second deployment from 2005 to 2006. He said he started cursing and being easily angered, when he used to be very patient and didn’t curse.
He said he was in denial, destructive and had suicidal ideations. Alcantara went through his first inpatient treatment and was full of hope, but he regressed after he retired, having lost some of his battle buddies. He said he started pulling away from his family and friends and got divorced.
“I felt out of control again and the tools that I used to apply were failing. I was always angry at every little thing,” Alcantara said. “So I ended up here. I’ve learned a lot. I’ve picked up a lot more tools and a lot of reinforcement of the old tools I used to have. It’s generated new hope for me again.

Learning value of support
“I learned I need support,” he continued. “I can’t do it alone. I’ve isolated myself, withdrawn and just avoided people for the last three years, and that hasn’t worked at all. I’ve learned how to make new friends and open up a little bit. Just having new friends, having someone who can understand you, someone who can empathize with what you’ve been through just helped me a lot. I’m not alone. Knowing my peers are going through what I’m going through helped a lot.”
Alcantara found a lifelong friend in his peer, Marine Corps and Vietnam War veteran Jim Alderman. Alderman said he plans on teaching Alcantara how to cliff dive and other adventurous sports. Alderman said Bay Pines saved his life and he recommends it to other veterans.
Alderman was a force reconnaissance Marine who taught Navy SEALs ground and water survival. He also served as a drill instructor at Marine Corps Recruit Depot Parris Island in South Carolina, and taught close combat at the FBI Academy.
For 50 years, Alderman said he didn’t admit to himself that he had PTSD — though he would wear a bulletproof vest and arm himself anytime he left his house. He was hesitant to go to Bay Pines for help but his wife, Pat, who he’s been married to since 1972, encouraged him to go.
“I had re-conned the area first and I called my wife up and said, ‘Pat, I don’t really need to go’ and she said, ‘Get up off your behind and go in there. You made it this far. It’s just another step, that’s all you’ve got to do. One more step, and you’ve got this, and you’re going to leave a mark on this place,’” Alderman said.

No longer in denial
Alderman said for years he thought, “I’m tougher than a bucket of nails. I am the best trained Marine the Marine Corps has ever had. I’ve been a drill instructor and a sniper. I’ve killed more people in more ways than you can shake a stick at. I can suck it up.”
But that day, he went up to the front door of Bay Pines and said, “I’m Jim Alderman, and I’m a United States Marine, and I’m here for help,” he said, crying.
Alderman recommends Bay Pines and other programs like it to veterans who need help.
“I guarantee you, there’s nobody tougher or more skeptical to do this than me and I would recommend anyone to just give it a shot,” he said. “It’s not going to be perfect. It’s not going to be easy. There’s going to be a lot of tears, a lot of heartaches, a lot of just hope and joy.
“And you need support,” Alderman continued. “You’re not going to do this by yourself. If you think you can figure it out by yourself, you’ll be just like you are for the next 10, 20, 30 years to your family, to your friends and you start getting isolated more and more. You’ll start disliking things you used to love to do. I sat in a chair for 15 years playing a video game. I really isolated myself to absolute oblivion. I had a 9 mm [pistol] sitting on my stand, right there, and I can’t tell you how many times I thought about using it. And then I joined the VA.”

Grateful for VA’s help
Wiping tears from his eyes, Alderman added, “I have absolute heartfelt gratitude. I just can’t thank everybody in this place enough. I was kind of embarrassed to ask for help, especially something going on in my head. I was stuck in time, back in 1967. I’m not expecting to get cured. There’s no way you’re going to cure this but they gave me tools to handle it. If you come here and have the same experience I do, you’ll leave here a better person. You’ll have a little hope and purpose, that’s all I was looking for.”
Alderman recently graduated from Bay Pines and he plans to reach out to other veterans in his community outside of Orlando, Fla.