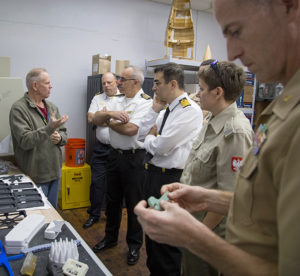 As part of a tour of the western United States, 17 foreign naval attachés and seven U.S. representatives made a visit to Naval Air Warfare Center Weapons Division China Lake, Calif., Oct. 27 to get an idea of various technology developments and applications within the U.S. Navy and Marine Corps.
“When we travel, we get to see what the U.S. Navy is capable of,” Capt. Magnus Lüning, Swedish Naval and Assistant Defense attaché, said. “China Lake is a part of that and it is pretty impressive.”
Following a division overview, the attachés toured NAWCWD’s Integrated Battlespace Arena to view simulation technologies, the additive manufacturing developments within the machine shop and autonomous aerial vehicles with members of the Image and Signal Processing group among other laboratories.
“The attachés seemed to really enjoy seeing the Shoot-able Remote Threat Ground Target systems and were particularly interested in the emerging utility of additive manufacturing,” Ken Hayes, Applied Manufacturing Technology Division head, said. “I could tell they appreciated understanding how WD’s manufacturing capabilities fit into the larger industrial base — commercial and organic — and were able to contrast that model with their own countries’ constructs.  A couple of attachés even discussed opportunities to collaborate with the division.”
Vice Adm. Ted Branch, deputy chief of Naval Operations for Information Dominance and director of Naval Intelligence, explained that the naval attachés are taken to Naval and Marine Corps stations throughout the United States each spring and fall in an effort to build stronger partnerships and trust with other navies, and to give them a chance to experience the people and diverse cultures within the country.
“We’ve enjoyed our day here touring China Lake,” Branch said. “We certainly got a sense and appreciation of what goes on out here and the great people who are doing it.”
This fall’s tour began with a visit to Marine Aviation Weapons Tactics Squadron at Marine Corps Air Station Yuma, Ariz., before travelling to NAWCWD China Lake. From there, the group went to Bridgeport to visit the Marine Corps Mountain Warfare Center and ended with the Naval Strike and Air Warfare Center at Naval Air Station Fallon, Nev.