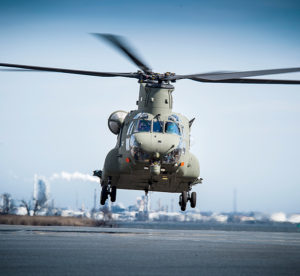 The new Mk6 Chinooks offer the Royal Air Force a modern, capable asset for meeting its mission requirements today and well into the future.

Boeing has delivered its 14th Mk6 Chinook, completing the United Kingdom’s most recent order and growing the RAF Chinook fleet to 60 aircraft.
The order completion coincided with the 35th anniversary of Chinook operations for the U.K.
“Since they were introduced into service in 1980, our Chinook fleet has played an integral supporting role for British forces and have been deployed on an almost continuous basis since,” said Royal Air Force Air Vice-Marshal Julian Young, director of Helicopters in the United Kingdom’s Defence Equipment & Support organization. “These new Mark-6 helicopters will significantly enhance our existing heavy-lift helicopter and Special Forces capability. Our overall fleet of 60 Chinooks will support our frontline troops in current and future operations for decades to come.”
The RAF has operated Chinooks in every major NATO engagement since 1980 and on virtually every continent. The service uses its Chinooks to perform troop transport, air assault and medical evacuation missions. In addition, the RAF and U.K. Ministry of Defence Equipment and Support have worked closely with Boeing to implement performance-based logistics initiatives to increase the readiness of Britain’s Chinook fleet. The Mk6 Chinook has a new, machined monolithic airframe, U.K.-specific avionics, rescue hoist and interoperable communication and navigation equipment.
“As our company approaches its centennial, milestones such as this one demonstrate the significance of Boeing’s long and close partnership with the United Kingdom,” said Steve Parker, vice president, Cargo Helicopters and Boeing H-47 Chinook program manager. “The new Mk6 Chinooks offer the Royal Air Force a modern, capable asset for meeting its mission requirements today and well into the future.”