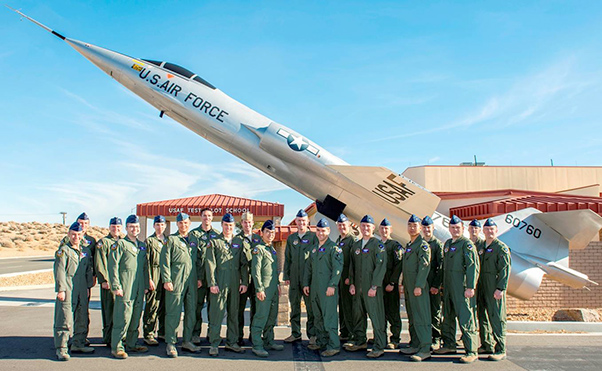 U.S. Air Force Test Pilot School Class 15A pose for a class photo in front of the NF-104 at the school house. Class 15A graduates Dec. 11. The comprehensive curriculum of TPS is fundamental to the success of flight test and evaluation. Upon graduating, graduates will have earned a Master of Science Degree in Flight Test Engineering.

The world of test got an early present this holiday season as the U.S. Air Force Test Pilot School at Edwards Air Force Base, Calif., gave the test world 21 new experimental test pilots, flight test engineers and a combat systems operator.
Class 15A graduates before friends, families, base leadership and fellow testers at Club Muroc Dec. 11.
It was the culmination of an intense, 48-week program that included more than 2,500 hours of academics and approximately 120 hours of in-flight training; transforming top operational pilots, navigators and engineers into elite flight test professionals.
They will now be integrated into teams throughout the flight test enterprise and begin shaping the technology and weapon systems of the future for the Air Force, sister services and allied nations.

Congratulations to Class 15A!