Over the summer, the Air Force Test Center sent a C-17 with air and maintenance crews from Edwards to Hawaii, but it was no vacation.
The crews worked 24-hour shifts for several months to support a Missile Defense Agency test of the Ballistic Missile Defense System over the western Pacific Ocean.
Edward’s role in the test was to launch a ballistic missile target at a precise time and location for the defense shields to track and terminate. The 412th Maintenance Group personnel spent the months leading up to the test keeping the missile under “strict environmental conditions on the back of the aircraft.”
“High altitude, heavy weight airdrop is something we’re doing a lot of here at Edwards, supporting not only MDA, but NASA with the Orion capsule drops that we’ve been doing out at Yuma,” said Capt. Stephen Koether, 418th Flight Test Squadron, C-17 experimental test pilot.
“Dropping something that heavy at that high of an altitude is not trivial, and the test center specifically, is getting very good at those unique missions.”
The airdrop supported MDA’s Ballistic Missile Defense System designed to negate ballistic missile threats. Specifically, this was an operational test of the THAAD weapon system located on Wake Island and the Aegis Ballistic Missile Defense from the Navy’s USS John Paul Jones guided missile destroyer.
After three months of preparation and multiple delays, the test, designated “Flight Test Operational-02 Event 2a,” was successfully executed Oct. 31.
Southeast of Wake Island, a C-17 supplied by Air Mobility Command launched a Short Range Air Launch Target (SRALT) over the Pacific Ocean that was detected and intercepted by the THAAD weapon system from Wake Island.
As the AMC C-17 turned towards home, the AFTC C-17 manned by an Edwards crew, launched a second target, an extended Medium Range Ballistic Missile (eMRBM) into the debris field created by the THAAD weapon system,which intercepted and destroyed the SRALT. One important aspect of the test event was to demonstrate that Aegis BMD was able to detect a target inside of a debris field.
Aegis BMD detected and tracked the eMRBM with its radar from the USS John Paul Jones while simultaneously engaging a BQM-74E air-breathing target with a Standard Missile-2 Block IIIA guided missile.
The USS John Paul Jones successfully launched a Standard Missile-3 Block IB Threat Upgrade guided missile, but an anomaly early in its flight prevented a midcourse intercept. The THAAD weapon system, which had also been tracking the eMRBM in a terminal defense role, acquired and successfully intercepted the target. 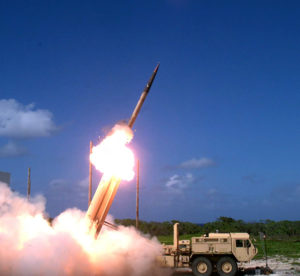 According to Capt. Patrick Ris, 418th FLTS, C-17 experimental test pilot, the eMRBM was launched according to plan exactly 4 minutes and 19 seconds after the SRALT. While Koether and Ris were flying the aircraft there was a team of highly specialized engineers ensuring the rocket was ready to launch in the back of the aircraft conducting a countdown “similar to what you would hear on the news for a space shuttle launch.”
“A test this complex, with multiple dynamic players, made the final moments of the countdown very intense for all parties involved,” said Ris.
Koether added, “We’re really max-performing the airplane to make sure we drop the missile at a specific location, at a specific time, at a specific altitude. That was what we were tasked to do and we did that very well.”
In addition to the precise timing, the high-altitude drop was done from just below 25,000 feet requiring the crew to breathe 100% oxygen for the duration of the inflight build-up to the drop itself. The eMRBM was extracted from the AFTC C-17 using an experimental carriage extraction system to pull it out of the aircraft. The non-standard rigging is used to mitigate the issues associated with high altitude airdrop and launch the missile in the safest, most efficient way possible. The missile went up into space and came back down.
Koether added that due to the highly complex nature of the test, coordination was at times challenging. There were personnel from the MDA, Air Force, Navy, Army and contractors all working at different locations across the Pacific Ocean.
Each C-17 was paired with a P-3 Orion chase plane for photo support and a KC-135 for aerial refueling. Below them, a ship known as Pacific Collector acted as a telemetry and range safety representative. The pacific collector monitored the health of the missile throughout the launch until its termination.
According to Ris there were also two control rooms in other parts of the world monitoring the test.
“It was a long test and I think the Edwards crews and the maintenance crews with their planes were very professional the entire time,” said Koether. “[Large & heavy, high-altitude airdrops are] never an easy thing and every drop presents challenges. I think we have the expertise here at Edwards and at the test center to overcome those challenges and bring success to the mission both for us and the Missile Defense Agency.”
The MDA will use test results to improve and enhance Aegis Ballistic Missile Defense, which is the naval component of the Missile Defense Agency’s Ballistic Missile Defense System.