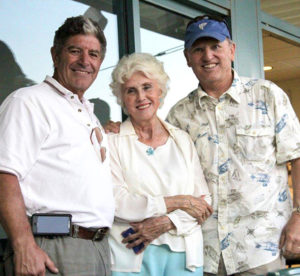 About to hang up his CEO hat, Stuart O. Witt claims it was luck that landed him the position as CEO and manager of Mojave Air and Spaceport nearly 14 years ago.
“I don’t really like the word retirement, it sounds so — legal,” says Witt, as he sits in his office that has a decor of an Alaskan cabin and overlooks the flight line and Tehachapi Mountains.
Perhaps he will spend a little more time salmon fishing with his sons, Tim, Spenser and Jordan, and doing a bit more traveling with his wife of 25 years, Susie.
“I’m pretty passionate about this little industry we’ve helped create and I want to continue to be a champion for its global success. How? I have no idea, but that is what I would like to do.”
With the encouragement of friends, family and a few politicians, Witt said he threw in his application and was chosen out of 96 other applicants. “That is basically one out of a hundred — I call that luck,” he says.
Those who know the Navy fighter pilot say Witt was simply the man for the job.
“I couldn’t think of a more passionate person to lead the charge for the advancement of Spaceflight and flight in general,” says Congressman Steve Knight, who has worked with Witt to pass several bills promoting civilian aerospace.
After all the testing he had done in the High Desert, Witt claims he didn’t know much about Mojave, other than when he made an emergency landing from an engine failure in 1973, and stopped during a solo cross country flight while in college. “I knew there was a business tucked away with a Hollywood niche and the bone yard, but there was a huge gap in my knowledge.”
The airport was in a state of physical disrepair with little money to get things fixed. “Dan Sabovitch created passion and brought Mojave into the 20th century in the 1980s, and there was a good run until the 1990s, but revenues declined.” 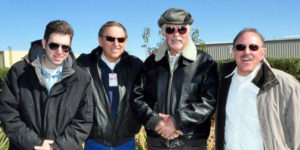 Without any clear ideas sitting on the horizon, Witt told the airport board that he needed 60 days to figure out what the current business situation was and what it could be. “If they liked my findings they could keep me; if they didn’t, at least they had a study they didn’t have before.”
Trying to grasp the current state of reality and what was possible, he interviewed tenants, employees and people around the community who had strong and emotional desires to grow exponentially and asked them what they expected from their new landlord.
“It is hard to predict what a company can do in 10 years, so we only looked five years down the road. We had an industrial park — sort of. We had a rail yard — not quite.”
Needing something concrete, Witt recalls walking into Dave Russel’s office and saying, “I need a picture.”
They pulled together an aerial map and divided the airport into segments, finding natural places where things could be built. Old taxiways and railroad tracks were extended and new ones were constructed, along with numerous hangers. “Who knew there were so many types of wheels on a train?” chuckles Witt.
Today the picture, “Vision Plan 2002” is hanging up at a local bank. “It’s ironic when I look at it; we pretty much built everything we imagined — and then some.”
Nominated for the Navigating Change Award 2013 by the Antelope Valley Board of Trade for his accomplishments in Mojave, Witt told an audience of more than 500 people that California had started down the path of risk adversity at all cost and created policy that invited aerospace companies to leave the state. Asking those in the audience from Sacramento that supported the airport to stand up, he paused while everyone remained seated. Governor Jerry Brown never visited Mojave, yet governors from other states did, and still do — quite frequently. 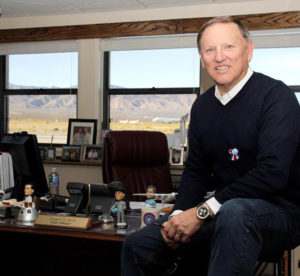 Stuart Witt will be hanging up his management hat at the Mojave Air and Space Port soon, but will continue to promote civilian aerospace.

Adopting the premise that at all times, there are attracting functions and repelling functions, Witt said words become policy and, over time, go unchecked, the concept of risk adversity, unbridled workman’s compensation, and declaring certain businesses as unsafe, California politicians set the tone — we don’t want you anymore.
“Boeing, McDonald Douglas, Lockheed — they all got the message and left — in large numbers to other states who created attracting forces. As Bill Richardson, former governor of New Mexico Governor, said, ‘California made it really easy for them to pick up their business.’”
Mojave had the land, airspace and good weather; however, that was not enough. Witt’s team needed to create an environment where people and companies such as Burt Rutan, Jeff Greason, Dave Mastin, BAE, Test Pilot School etc., had the freedom to test unconventional rockets, planes and perhaps the most freeing of all — permission to take risks.
“You don’t have to create all the good ideas, you just have to create a good environment and good ideas will emerge from the people.”
Claiming to be a simple guy, Witt said he has never taken a business class in his life. Nonetheless, he now oversees an industry worth billions. He ran an engineering company yet, he was never an engineer.
“I’ve never been fully qualified for any job I was hired for, I learned as I went along.” He gives much credit of his success to his father who taught him to pay attention to his environment. “Dad always said,
‘I don’t care what business you are in, it is all about people.’ I had a lot in my tool chest when I came to Mojave.”
Call it luck, magic or years of preparation, when opportunity knocked, Witt was ready. “I didn’t know if Mojave needed me or I needed Mojave.” He simply claims he was at the right place, at the right time in life, when he needed a new challenge.
Finishing his part, he now feels it is time to pass the torch onto Karina Drees.
“I know she will do great things. People say she has big shoes to fill, and I tell them — she has big feet!” He is proud of the board for choosing her. “I had big shoes to fill and I have pretty big feet also.”
Thinking of six words that would sum up his life, Witt says he wants his epitaph to say, “I enjoyed putting people to work.”
He learned that if you hire someone who is passionate about what they do, everybody is successful. “It’s not just about one person succeeding.”
As he looks at the hangers that Richard Branson and Paul Allen put up — “I remember when it was just dirt and had been just dirt, for the past 30 billion years, or whatever — and I walk into those hangers now and little ol’ Mojave is building the biggest airplane that has ever been built, on a piece of land that was just dirt — I get jazzed by that! Did I start that company? No. Did I create the idea? No. Did we create an environment where people with means came together with people with ideas? Yes we did!” 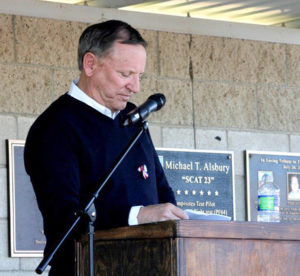 Wearing his heart on his sleeve and making no apologies for granting permission, Stuart Witt spoke at a memorial dedication saying that the research being performed each day at Mojave has proven sound for the nation and all humanity, and will continue to come at a cost, just as every other human exploration endeavor.

One day while sitting before Congress, Witt took a moment and looked at those representing major companies and proudly thought to himself, “wow! I’m representing Mojave, how cool it that?”
While he says his piece is very small, it was an essential piece of the puzzle that could have happened anywhere around the world, but it happened in Mojave. “We created an environment that gave people permission to take risks.”
Unfortunately, with that permission comes sacrifice. “That is the one thing that can keep me up at night,” says Witt, thinking about the lives lost while pushing boundaries.
On Oct. 30, 2015, a plaque honoring Michael Alsbury (American test pilot for Scaled Composites killed Oct. 31, 2014 during the test flight PF04 of the Virgin Galactic SpaceShipTwo VSS Enterprise) was unveiled at Legacy Park, a beautiful little rest area for visitors and a wall that memorializes those from the “Mojave Family” who lost their lives while taking such risks.
Addressing those at the intimate memorial celebration, Witt wore his heart on his sleeve. “I’m going to be brutally honest with everybody today because I need to say this, and maybe I need to have a little cleansing myself, but on my watch we decided to figure out what we were actually promoting and selling, and what we came up with in a word is — permission.”
“When you look at the way western society has migrated for an obsession of risk adversity at all cost, in all sectors of society, if it hadn’t been for the pioneers before us — so many streets named at China Lake, Edwards, George Air Force Base and the Aerospace Valley — by pioneers of aviation, I don’t know where this nation would be.”
Witt said he visits the park at least once a week.
“We give your company, your CEOs, your presidents, your leaders, permission to succeed and permission to fail. I don’t know of another place on earth where you can be granted that kind of permission.”
On his watch, 17 names have been associated with that price — including four recently added from BAE. “Permission has a cost, folks.”
Although many criticize and condemn Witt’s promotion of permission — it will not change his passion or direction. “I will not retreat. The research being performed each day at Mojave has proven sound for the nation and all humanity, and will continue to come at a cost, just as every other human exploration endeavor.”