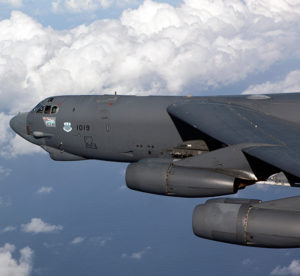 U.S Air Force B-52 bombers can now deliver a greater variety of munitions thanks to enhanced internal weapons bay launchers delivered by Boeing.

BARKSDALE AIR FORCE BASE, La.–Six of the U.S. Air Force’s B-52 bombers can now take flight with a greater variety of weapons, thanks to enhanced internal weapons bay launchers delivered by Boeing.
The upgraded launchers allow the B-52 to carry GPS-guided or “smart” weapons in the weapons bay for the first time and are ready for use.
“The upgrades to the B-52 bomber’s internal weapons bay have made it possible to have zero gap on the bomber’s long-range bombing capabilities as we transfer from Conventional Air Launched Cruise Missiles to Joint Air-to-Surface Standoff Missile – Extended Range,” said Col. Tim Dickinson, B-52 Program Director with the U.S. Air Force.
The enhancement modifies an existing common strategic rotary launcher in the internal weapons bay into a conventional rotary launcher and increases the total number of smart weapons the B-52 can carry and deliver, giving crew members greater flexibility to adapt to changing conditions on the battlefield.
The launchers, which can be moved from one bomber to another, can carry, target and launch eight Joint Direct Attack Munitions. Future increments of the weapons bay launcher upgrade program will add the capability to carry Joint Air-to-Surface Stand Off Missiles and Miniature Air Launched Decoys.
“With this added capability, the B-52 bomber will remain relevant for decades to come,” said Jeff Lupton, Boeing’s B-52 Internal Weapons Bay Upgrade program manager. “Our commitment to providing our USAF customer with uncompromising service enabled us to successfully deliver these launchers on an accelerated schedule.”
These deliveries follow several months of successful ground and flight testing of the launchers and support the U.S. Air Force’s accelerated schedule to complete the first stage of the upgrade program – low rate initial production.