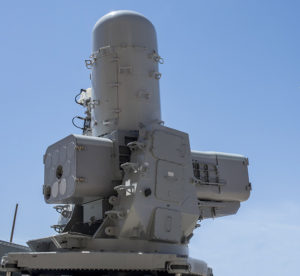 Raytheon’s SeaRAM® anti-ship missile defense system used a Rolling Airframe Missile Block 2 for the first time to intercept an incoming target during a U.S. Navy live-fire exercise at China Lake, Calif.
The SeaRAM system detected, tracked and engaged an inbound threat, and fired a RAM Block 2 that successfully intercepted the target. SeaRAM was configured with a nearby Phalanx Close-In Weapon System for the test, similar to the way the two systems would be deployed together on U.S. Navy destroyers.
“SeaRAM continues to demonstrate how vital a weapon it is for defending navies against anti-ship missiles,” said Rick Nelson, vice president of Raytheon’s Naval and Area Mission Defense product line. “Raytheon’s close-in defense systems can provide warfighters with a capability found nowhere else, and help the U.S. Navy extend its reach with a layered defense that can counter various threats.”
RAM Block 2, which reached Initial Operating Capability in May, 2015, adds enhanced kinematics, an evolved radio frequency receiver and an improved control system.
The successful demonstration followed the U.S. Navy’s similar successful SeaRAM firing of a RAM Block 1 earlier this year from a littoral combat ship.
Raytheon’s Phalanx is a rapid-fire, computer-controlled radar and 20mm gun system that acquires, tracks and destroys enemy threats that have penetrated all other ship defense systems.
* Intended to enlarge Phalanx’s keep-out range against evolving anti-ship missiles, rotary- and fixed-wing aircraft, unmanned aircraft systems, and other threats, SeaRAM anti-ship missile defense systems use advanced Phalanx Block 1B sensors and replace the gun with an 11-round Rolling Airframe Missile guide.
* SeaRAM is aboard the Independence variant of the U.S. Navy’s Littoral Combat Ships.