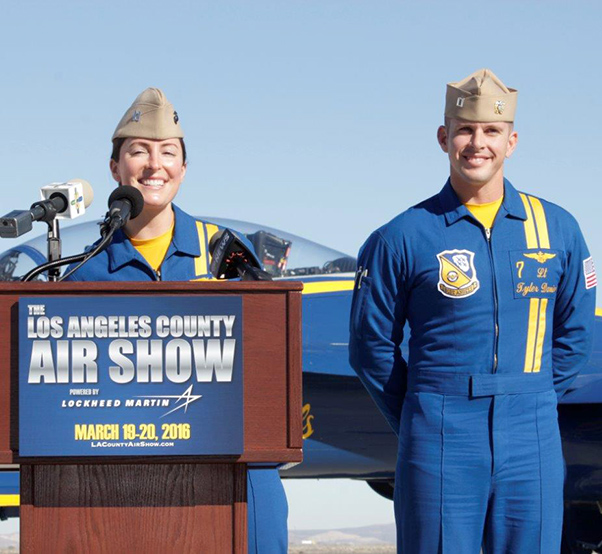 Blue Angels Capt. Corrie Mays and Lt. Tyler Davies speak at a press conference after checking out the airspace for the 3rd Annual LA County Air Show March 19-29 at Gen William J. Fox Airfield in Lancaster. This year’s show will also commemorate the 75th anniversary of the Pearl Harbor attack Dec. 7, 1941, with a pyrotechnics show and history lesson.

Scaled Composites White Knight flew overhead only minutes before the Blue Angels returned to Fox Field for a preliminary check for the 3rd Annual LA County Air Show that will take place March 19-20 at the General William J. Fox Airfield in Lancaster.
“I can’t think of a better and more appropriate place for an air show,” said LA County Air Show Executive Director, Dennis Dunbar, “it’s going to be fantastic this year.”
The airfield looked great and ready for a show declared Blue Angel pilot Lt. Tyler Davies and Capt. Corrie Mays during a press conference to announce the show. Davies will narrate the 2016 show.
“Tora! Tora! Tora!” is a pyrotechnical show featuring Japanese Zero Fighters, Kate torpedo bombers and Val dive bomber aircraft will produce a living history lesson commemoration of the 75th anniversary of the attack on Pearl Harbor with realistic explosions and precision flying. Keeping with the Pacific Theater theme, the Texas Flying Legends will perform choreographed dogfights. 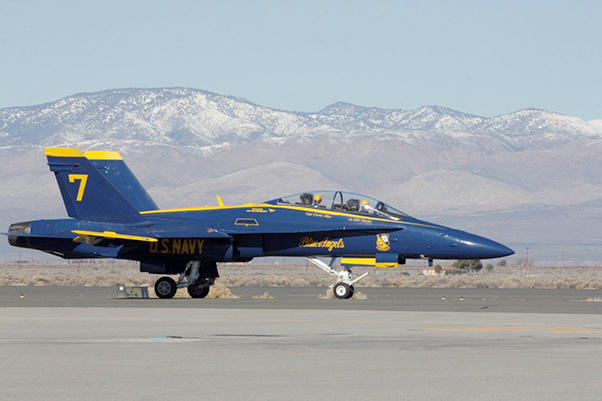 They’re back — The Blue Angels returned to Fox Field for a preliminary check for the 3rd Annual LA County Air Show that will take place March 21-22 at the General William J. Fox Airfield in Lancaster. The Navy’s finest were at the inaugural air show.

“It is going to be a great show with even more displays, a larger STEM tent and more aerobatic shows,” said Allen Hoffman, president of LA County Air Show.
In less time than it takes to plan a wedding and in only three years, the show has a reputation of one of the finest in the country with a clean, friendly, family atmosphere. To volunteer or ticket information, visit www.lacountyairshow.com.